SEOUL, July 3 (Yonhap) -- President Moon Jae-in's approval rating rebounded slightly last week amid positive reception of the South Korea-U.S. summit and his decision to give citizens full access to the vicinity of the presidential compound, a survey indicated Monday.

In the Realmeter survey conducted from Monday to Friday, 75.3 percent approved of Moon's job performance, up 1.1 percentage points from the previous week.

Those who disapproved of his job performance made up 17.3 percent, down 1.3 percentage points, while 7.4 percent said they were unsure or refused to answer.

The survey attributed the uptick in public support to a series of positive news reports about Moon's first summit with U.S. President Donald Trump in Washington last week and the removal of the nighttime curfew for the road leading to the presidential office Cheong Wa Dae.

Last Monday, the government began allowing citizens and tourists to drive or walk near the presidential office at all hours as part of Moon's efforts to reach out to citizens and shake off the erstwhile aloof -- or high-handed -- image of a president. The road to Cheong Wa Dae was closed off during the nighttime for decades for security reasons.

The survey put the rating for the ruling Democratic Party at 53.3 percent, down 0.3 percentage point, while the figure for the main opposition Liberty Korea Party stood at 15.9 percent, up 1.4 percentage points.

The ratings for the Justice Party and Bareun Party were tallied at 6.3 percent and 6 percent, respectively.

The People's Party ranked fifth with 5.1 percent support, down 1.2 percentage points. It has been thrust into a major crisis since one of its members was accused last week of manipulating election-season allegations against Moon's son.

The survey was conducted on 2,520 adults across the country and had a margin of error of 2 percentage points with a 95 percent confidence level. 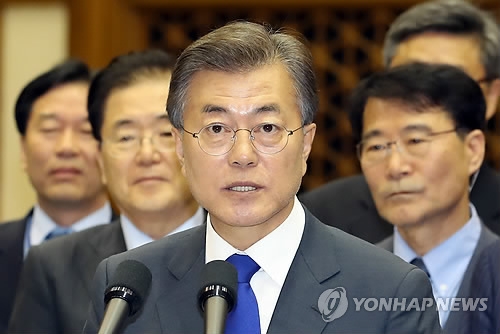