The proportion of female low-salaried workers who are paid less than two-thirds of the median wage stood at 37.6 percent in 2015, down from 37.8 percent the previous year, according to the statistics by the OECD.

The figure is the highest among 16 OECD member countries that have provided comparable data.

South Korea has maintained the highest ratio of female low-wage earners for some time, although the figure has been steadily decreasing, dropping to 38.21 in 2011 from 45.77 in 2000.

The United States was the second highest with 29.81 percent.

Finland had the lowest figure at 10.35 percent and Denmark was the second lowest at 11.35 percent.

South Korea, meanwhile, ranked fourth in the combined ratio of low-wage earners for both male and female employees with 23.5 percent in 2015.

Colombia had the highest percentage at 25.27 percent, followed by the U.S. at 25.02 percent and Ireland at 24 percent.

South Korea's ratio for male low-wage earners was 15.2 percent in 2015, the ninth highest among the 16 OECD member countries checked. 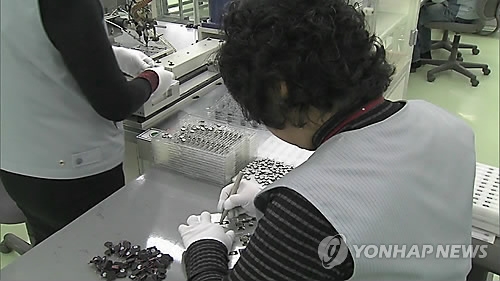 S. Korean women paid much less than men compared to counterparts in other OECD economies: data

S. Korean women paid much less than men compared to counterparts in other OECD economies: data