SEOUL, July 3 (Yonhap) -- A senior member of a minor opposition party denied his involvement in a fabricated tip-off about President Moon's son during the election campaign earlier this year.

Lee Jun-seo, a former senior official of the People's Party, appeared at the Seoul Southern District Prosecutors' Office to face questioning over the party's allegations, based on a fraudulent statement from an anonymous informant, that Moon Joon-yong landed a job at a public agency in late 2006 based on his father's influence.

Two other party officials were to appear for questioning later in the day.

"I only found out about it in late June. I had no idea (about the scheme), and I didn't put any pressure (on anybody) whatsoever. I came here to make myself clear," Lee told reporters as he went into the building.

The prosecution arrested a party member Lee You-mi on Thursday, on charges of making up and spreading the fake tip-off about Joon-yong.

They suspect that Lee Jun-seo handed the information in an audio file and captured images from a mobile messenger over to higher ranking party officials, knowing about the tip-off's inauthenticity. Lee has denied any knowledge and involvement about the scheme.

Lee You-mi confessed to handing in the fake information to Lee Jun-seo, who was on the party's leadership panel. She has insisted she didn't act alone.

The party raised the suspicion against Moon, then front-runner of the Democratic Party, in the lead-up to the May 9 presidential election.

In a resolve to weather the crisis, the People's Party on Sunday conducted its own inquiry on former party leader and then Moon's rival Ahn Cheol-soo, who has avoided clarifying his stance in public about the allegations.

He purportedly told the in-house probe that he didn't know about the fabrication until he was informed by a party official in late June. 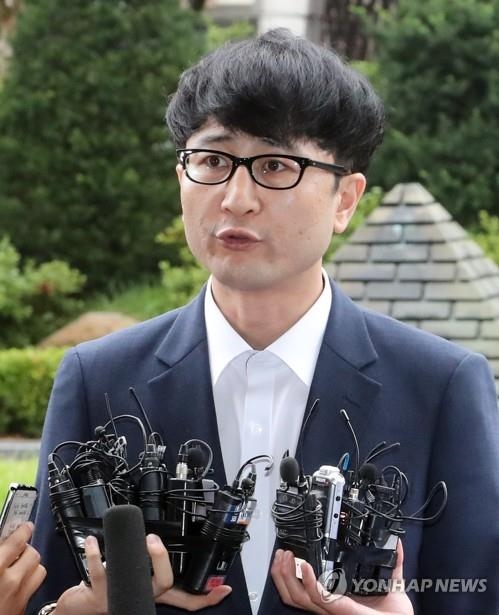