The footage shows Lee has taken an about-face move in contrast with her past vibrant and sexy image, with the chanteuse, appearing exhausted and dehydrated, walking through a vast desert in search for water.

The mid-tempo song, free of electronic sound, also has a band-heavy quality to it, arranged using jangly electronic guitars, and hefty bass and drum sounds

The former dance music icon collaborated with composer Kim Do-hyun for her self-produced album, a follow-up to her fifth full-length album "Monochrome" out in May 2013.

Singer-songwriter Lee Juck and several hip-hop artists with Psychedelic Records, a label owned by Kiwi Media, have also chipped in the production.

The new album will include songs written and composed by the singer, according to the agency.

Lee -- who resettled on Jeju Island to live in relative seclusion after marrying guitarist Lee Sang-soon in 2013 -- signed with Kiwi Media Group late last year and has been busy producing her new album. 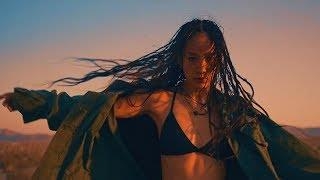