SEOUL, July 3 (Yonhap) -- South Korea is in talks with Taiwan to buy fishing rights in its sea as a bilateral fisheries agreement with Japan has fallen through, the country's maritime affairs minister said Monday.

"The negotiations with Japan have faced a big stumbling block," Kim Young-choon, the minister of the Ministry of Oceans and Fisheries, said in an interview with Yonhap News Agency. "We are in contact with Taipei to secure fishing grounds in Taiwanese waters to replace those near Japan."

The Seoul-Tokyo fisheries pact expired in June last year, but the bilateral talks to renew their fisheries agreement have made no headway over thorny issues like the number of South Korean longline boats that can operate in Japan's exclusive economic zone (EEZ).

Reflecting this, the Seoul government has been seeking a substitute hairtail fishing bank in Taiwanese waters, some 960 kilometers southeast of the Korean Peninsula, the policymaker said.

He said ministry officials met their Taiwanese counterparts last month and will have another meeting next week.

"It is far from South Korea to some extent," said the minister, who is also an incumbent lawmaker for the ruling Democratic Party. "But when we buy the fishing rights in the Taiwanese waters, the government can consider supporting fishermen with fuel costs."

At the same time, the maritime affairs chief said he will make constant efforts to conclude the Seoul-Tokyo fisheries agreement in the near future.

"In 2013 and 2014, the amount of fish caught by South Korean boats had been almost equal to Japanese vessels. But the Japanese government started to reconsider from 2015 onward as its catch was surpassed by South Korea," Kim said. "I will do my best to reach an agreement through various channels." 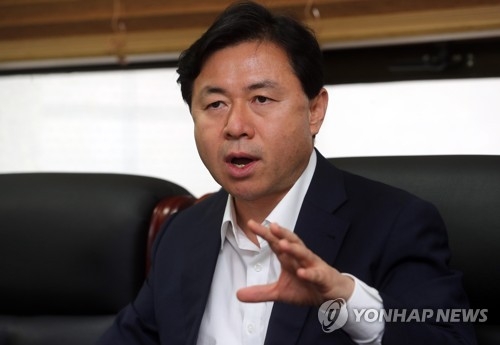 Against illegal fishing by Chinese boats in the Yellow Sea, Kim said he will keep taking strong measures, including using firearms.

Last year, the South Korean government intensified its efforts to crack down on Chinese illegal fishing and strengthened punishment after one of its patrol boats sank while pursuing a Chinese boat.

"The number of illegal fishing cases decreased in the latter half of last year following the government-led tightened crackdown," Kim said.

"It is right to take stricter measures if violent actions taken by Chinese fishermen to resist arrest lead to the injury of law enforcement officials."
(END)