SEOUL, July 3 (Yonhap) -- North Korea on Monday celebrated the anniversary of its strategic force in charge of missile development, saying that its missiles can hit any target in a speedy and accurate manner.

But this year, Pyongyang refrained from delivering a bellicose message against the United States as it is apparently gauging Seoul and Washington's new North Korea policy direction in the wake of the allies' summit last week.

North Korea's rubber-stamp parliament announced last year that it will designate July 3 as the Day of Strategic Force to mark its creation in 1999.

"The Strategic Force, which is beloved by people, is the nation's pride and power. It has provided the country a reliable nuclear force," said the Rodong Sinmun, the main organ of the ruling Workers' Party of Korea.

It said that missiles developed by the force can hit any target on Earth and cannot be tracked due to its speedy launches and flights. Their launches are always successful, it added. 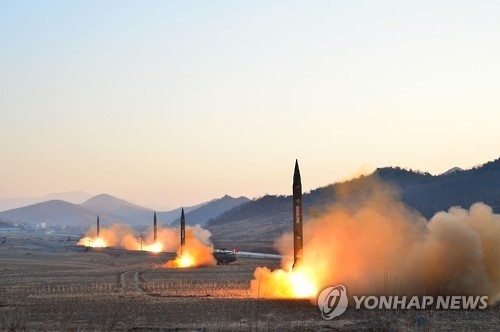 North Korea unveiled the existence of its strategic rocket forces for the first time at a military parade in 2012 to mark the centennial of state founder Kim Il-sung's birth. In 2013, the country set up the strategic forces by expanding the rocket forces.

It has fired ballistic missiles, including the Hwasong-12 intermediate-range missile on five occasions, since liberal South Korean President Moon Jae-in took office in May.

But at the anniversary, the North did not send a message full of war rhetoric against the U.S. Last year, it threatened that it will engulf U.S. military bases in a sea of fire.

Moon and his U.S. counterpart Donald Trump held their first summit last week, during which North Korea's nuclear issue was one of the main agenda items.

They agreed to leave the door for dialogue with North Korea open "under the right circumstances," a joint statement said.

It showed that Trump "supported President Moon's aspirations to restart inter-Korean dialogue on issues, including humanitarian affairs," and hailed South Korea's "leading role" in creating the conditions for the peaceful reunification of the two Koreas.

North Korea's state media has yet to unveil its response to the outcome of the summit.