SEOUL, July 3 (Yonhap) -- South Korea's President Moon Jae-in on Monday renewed his wish for North Korea's participation in the 2018 PyeongChang Winter Olympics, saying it will contribute to peace on the Korean Peninsula and beyond.

During his meeting with International Olympic Committee (IOC) President Thomas Bach, Moon also said he would seek Beijing's help in persuading Pyongyang to send its delegation to the Olympics during his future meeting with Chinese leader Xi Jinping, possibly at the Group of 20 summit slated for Friday and Saturday in Germany.

During an opening ceremony for the World Taekwondo Championships on June 25, Moon proposed that the two Koreas create a unified team for the Olympics. The proposal fanned anticipation for a joint team or at least a joint march at the opening ceremony.

"Should the North participate in the Olympics, this will contribute to not only enhancing the Olympic spirit but also fostering peace in our region and the world, and harmony for mankind," he was quoted by his spokesman as saying during the meeting.

"I understand that the North's participation is contingent on the IOC decision," he added.

The president also said that as the IOC and South Korea shared the view that Pyongyang's participation is good for the successful hosting of the PyeongChang Olympics, the two sides will closely work together to realize it.

Bach, in response, said that he actively supports Moon's policy for inter-Korean reconciliation and peace on the Korean Peninsula, which he noted dovetails with the spirit of the Olympics, Moon's spokesman Park Soo-hyun told reporters. 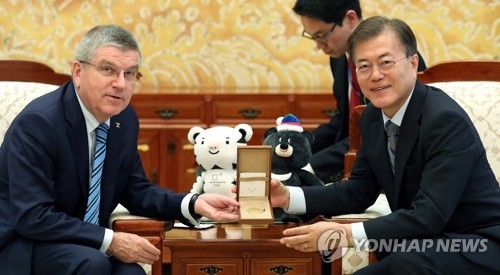