(ATTN: UPDATES with arrival of eggs in Incheon in para 2)

According to the Ministry of Agriculture, Food and Rural Affairs, 650,000 eggs imported by a local company arrived in Incheon, west of Seoul, via ship. Earlier on Sunday, another 320,000 eggs arrived in the southeastern port city of Busan, also by ship.

The eggs can be distributed after going through a quarantine and sanitary inspection, which can take up to three weeks, the ministry said.

If they reach the market, it will be the first time eggs brought in from the Southeast Asian country will be sold here. Currently, eggs from six other countries -- New Zealand, Australia, Canada, Denmark, the Netherlands and Spain -- are imported.

South Korea imported eggs from the United States for the first time in January but stopped the process due to a bird flu breakout there.

The government has been dealing with rising egg prices since it suffered the worst avian influenza (AI) outbreak last winter, which led to the culling of more than 33 million birds. It has been grappling with another outbreak since last month. 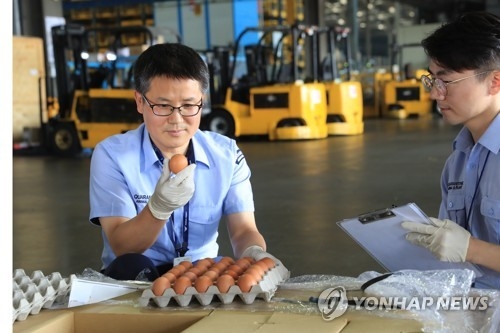