"We had a very good and truthful meeting with President Moon," Bach said to Yonhap News Agency at Incheon International Airport. "We're all interested in having as many winter sports countries as possible participating in the Olympic Winters Games including the Democratic People's Republic of Korea."

The Democratic People's Republic of Korea (DPRK) is official name of North Korea. 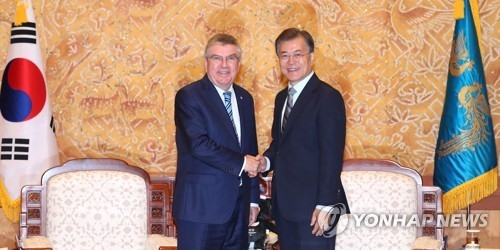 South Korea's presidential office Cheong Wa Dae earlier said Moon told Bach that North Korea's appearance at the PyeongChang Games will further contribute to peace on the Korean Peninsula and that he would even seek Beijing's help in persuading Pyongyang into sending a delegation to the Olympics.

Bach said the IOC welcomes Moon's passion and idea, and it is ready to work with the North Koreans in joining the first Winter Games in South Korea.

"We've invited already the national Olympic committee of the DPRK (to compete in PyeongChang), and we're supporting athletes from the DPRK to meet the qualifying standards," he said. "We very much appreciate great personal commitment of President Moon to the success of the Games as well as his policy for a dialogue and peace because these are exactly Olympic messages and Olympic values."

Bach's trip came with anticipation rising for a potential unified Korean team at PyeongChang next February or a joint march in the opening ceremony. The Koreas have fielded joint teams in two international competitions -- the 1991 World Table Tennis Championships and the 1991 FIFA World Youth Championship -- but never at an Olympics.

Bach, however, refused to give a clear answer on a potential unified Korean team at the PyeongChang Games, saying "Olympic Games are about sport, dialogue and peace."

Cheong Wa Dae spokesman Park Soo-hyun earlier told reporters that ways and methods of North Korea's Winter Olympic participation can be discussed only after Pyongyang decides to take part in the PyeongChang Games. Moon never directly expressed that he prefers to see a unified Korean team, the spokesman added.

The 2018 Winter Olympic Games are scheduled for Feb. 9-25 in PyeongChang, some 180 kilometers east of Seoul in Gangwon Province, and adjacent sub-host cities Gangneung and Jeongseon.