SEOUL, July 3 (Yonhap) -- A funeral offers a chance for emotional bonding among the bereaved family while getting together and grieving for the loss of a loved one. But it can also be the moment when raw emotions and tensions placed under wraps for far too long abruptly come out and viscerally hurt each other.

In "The House of Mourning," artist Cho Moon-ki wittingly -- and somewhat hilariously -- captures the tangle of raw emotions and physical wrangling among the family trapped in the latter situation. 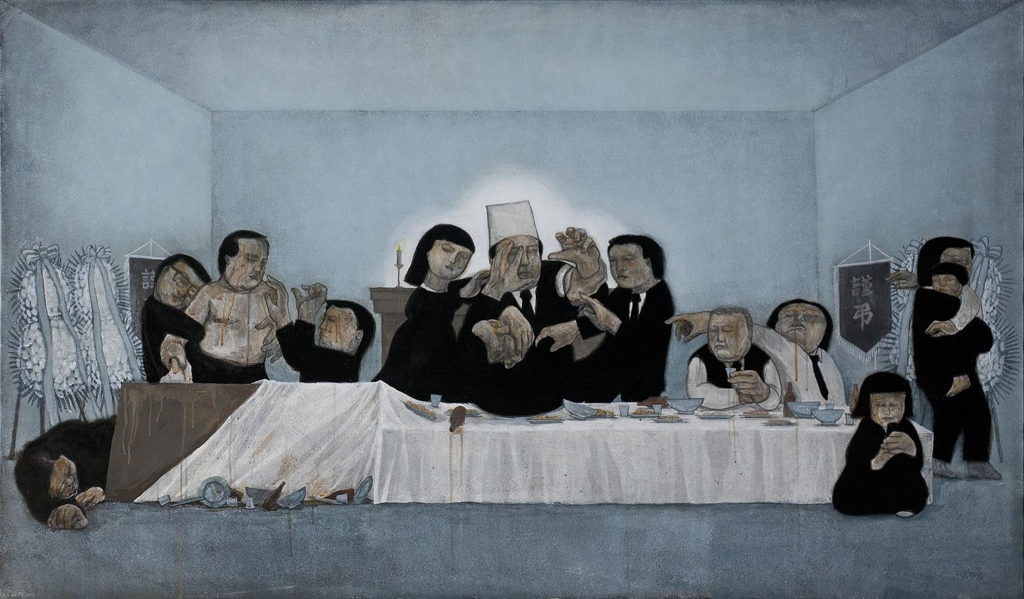 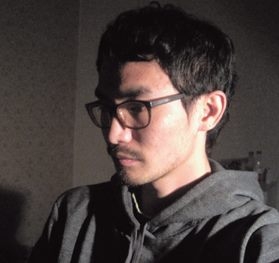 The chief mourner presses down hard with one hand on the mouth of another man who struggles to hit him in the face, while others try to stop the fight. A shirtless man, possibly drunk, is engaged in a brawl with another man who, sitting on his knees, tries to block with both arms what might come next from the irrational, angry relative. Right next to them, a woman lies on her side, possibly having passed out from exhaustion or too much alcohol. A girl, totally oblivious to the on-going brouhaha, looks intently at her cellphone.

By showing the ugliest and lowest possible scene that a family can make, who feels nothing but bitterness, anger, contempt and frustration toward one another, the artist talks about tensions and inner conflicts from human relationships and a possibility that a parent's unconditional love is only a myth. 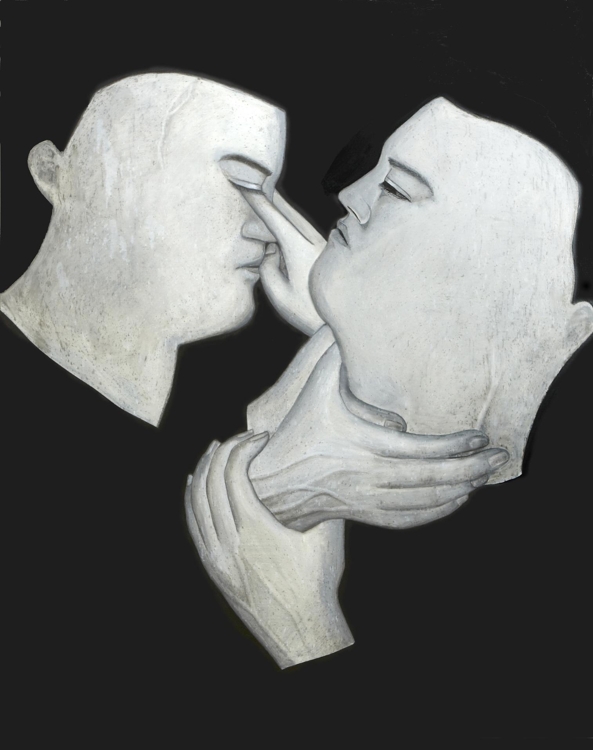 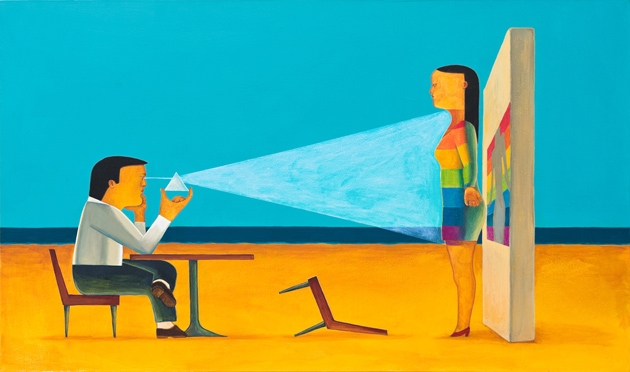 "I've been interested in inner conflicts of relationships. As a family is the basic unit that comprises a human society, I've inevitably gotten down to various problems arising from the unbreakable emotional bridle that a family, as an institution, puts on individuals," the artist told Yonhap News Agency last Friday at Barakat Seoul where his paintings were on display as part of the exhibition "The Absence of Paterfamilias."

Pointing out the deeply patriarchal nature of Korean society, he added that the country still put too much emphasis on the purported merits of being obedient and staying within a group, while muting the voices for individual happiness.

Since his school years, he has been quite rebellious, he said. He used to be obsessed with Japanese animations. And the government's ban on imports of Japanese cultural products that had lasted until 1998 only made his obsession grow more in protest. 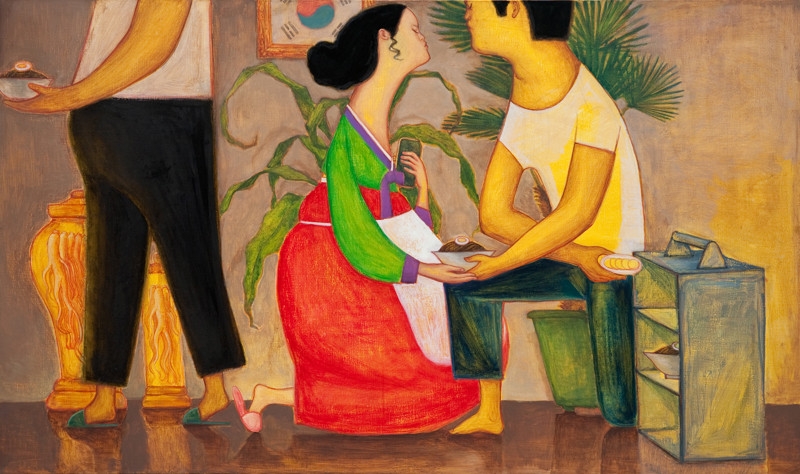 He often intentionally drew provocative paintings that made others frown at them in shock or disgust, which in turn gave him a thrill and excitement.

"I liked to be different from others and enjoyed watching how people would react to my paintings. I still do and hope my work gives fodder to think and talk about," the 39-year-old said, adding, "Work that everyone likes is destined to not be good. I'd like my work to inspire or even provoke others."

Cho thinks a painting is only completed when a viewer adds his or her own interpretation and story to it. That explains his reasoning behind holding back emotional descriptions, like no facial expressions, and metaphorical satire. 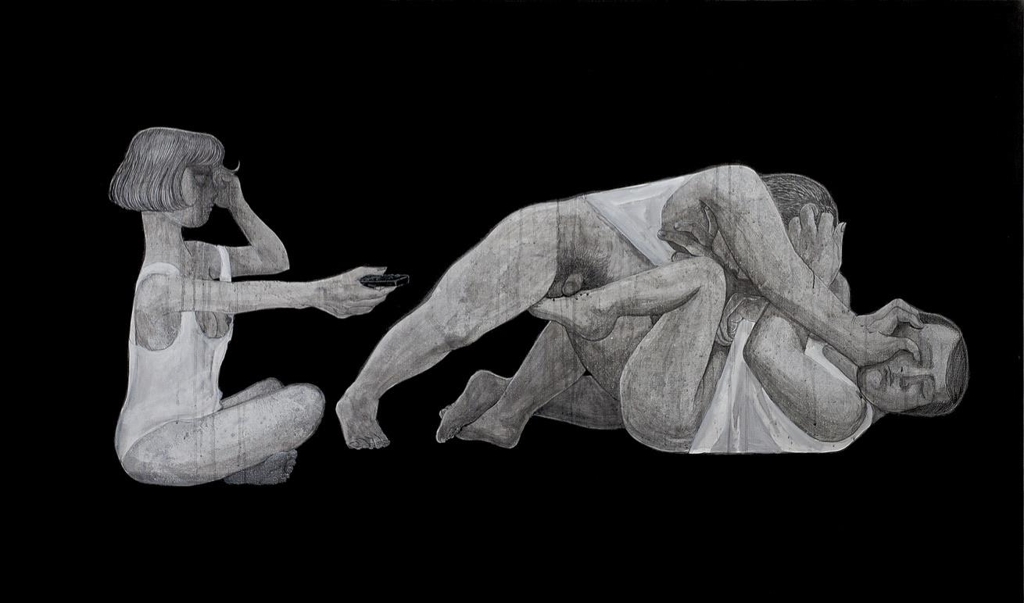 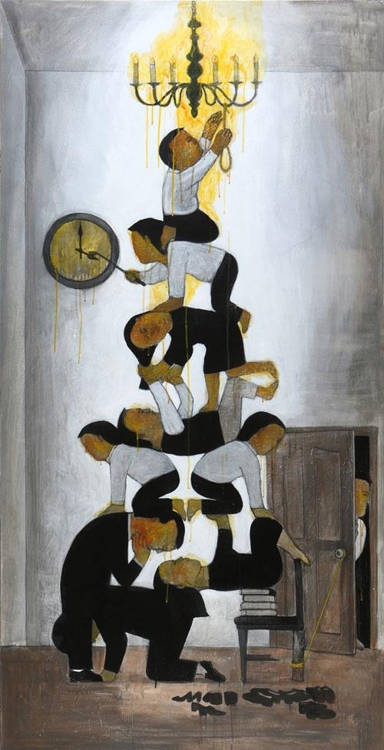 "I want my paintings to have different meanings depending on who views them. A painting will be only fully complete when it has a story to tell. I feel motivated when it happens," he said.

While Cho is still looking for what an ideal family looks like, he wants others to join the conversation on the subject or at least to take time to think about it themselves.

"To be honest, I don't have an answer myself. But the bottom line is that every individual is important and their happiness is what matters. That much I know," he said. "I dream of a society where an individual isn't forced to sacrifice for his or her family and a bigger institution, for that matter."

(Yonhap Interview) Family is 'unbearable heaviness of being'

(Yonhap Interview) Family is 'unbearable heaviness of being'