SEOUL, July 3 (Yonhap) -- South Korean President Moon Jae-in urged North Korea to return to the negotiating table Monday, saying now may be the last chance for the communist state to do so.

In a meeting with former U.S. President Barack Obama, the new South Korean president noted he and U.S. President Donald Trump agreed to continue using sanctions and pressure as a tool to denuclearize North Korea but also use dialogue in parallel.

Moon returned home late Sunday following his trip to the U.S. for his first summit talks with the new U.S. leader. 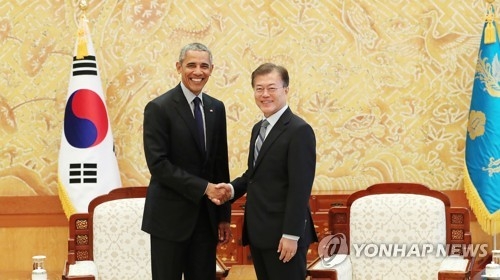 In a joint statement issued after their summit, Trump stated his support for South Korea's leading role in ridding North Korea of its nuclear weapons, as well as Seoul's ongoing efforts to resume dialogue with Pyongyang to discuss humanitarian issues.

"We had greater success than we expected in meeting with President Trump last week that included an agreement to further strengthen the Korea-U.S. alliance," Moon told Obama.

Obama was on a trip here to speak at a leadership forum organized and hosted by a local daily newspaper.

Also, the Korea-U.S. alliance currently has the bipartisan support of the United States' ruling and opposition parties, he added, according to Yoon.