During a parliamentary confirmation hearing, Kim also pointed out rampant public distrust over the government's environmental information, stressing the need to enhance their accuracy and widen public access to it.

"Based on our deep self-reflection on the ministry's failure to fully serve its mission overshadowed by the values of development, I will have it reborn as one that will spearhead the country's sustainability agenda," Kim said during her opening remarks. 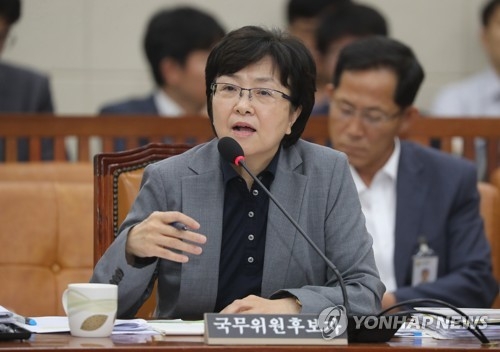 "The philosophy of sustainable development will serve as criteria not only for evaluating the past of the environmental ministry, but also for formulating future policies," she added.

The former presidential advisor and civic activist also underscored the need for "social consensus" on crafting and implementing environmental policies, referring to public division over a range of sensitive issues, such as installing cable cars on mountain parks.

"I will regard social consensus as the core principle... If given the opportunity, I will establish this core value in the ministry, and realize and keep it," she said.

Touching on the victims of a long-standing humidifier disinfectant scandal, Kim said the government should also shoulder part of the compensation costs, and that she would seek to arrange a meeting between President Moon Jae-in and the victims and their families.

During the hearing, opposition lawmakers grilled her over the allegation that her son landed a job at a civic enterprise last year thanks to her influence. Kim denied it.

A ministerial appointment does not require parliamentary consent, but disapproval often imposes a political burden on the president.