"I will try to mobilize all available means (to improve frayed inter-Korean ties). I think that a long-term perspective and persistence would be needed," Cho told reporters after taking office earlier in the day.

The leaders of South Korea and the United States agreed to leave the door for dialogue with Pyongyang open "under the right circumstances" during their summit last week.

President Moon Jae-in took office in May with a pledge to seek North Korea's denuclearization and dialogue and engagement with the North in parallel.

A joint statement adopted after the summit showed that U.S. President Donald Trump "supported President Moon's aspirations to restart inter-Korean dialogue on issues, including humanitarian affairs," and hailed South Korea's "leading role" in creating the conditions for the peaceful reunification of the two Koreas. 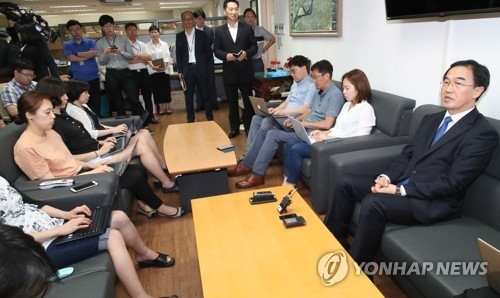 "Rather than being swayed by the North's each and every reaction, I believe we need to take a long-term perspective in handling North Korea's affairs."

Moon is seeking to take a two-phased approach to resolving North Korea's nuclear standoff -- a freeze on Pyongyang's nuclear and missile programs and their complete dismantlement.

"Based on the outcome of the summit, (I) will make efforts to resolve North Korea's nuclear issue and mend inter-Korean relations in a way that is mutually beneficial to each other. To this end, I will strive to make such efforts with persistence and step by step," he said.

Cho described reunions of families separated by the 1950-53 Korean War as the "urgent" issue.

"I feel strongly that the issue warrants urgency," the minister said. "(I) will step up efforts to resolve the issue as soon as possible with the hope that specific measures would be drawn up."

He said at his confirmation hearing last week that he would consider proposing the family reunions to the North for Liberation Day on Aug. 15 or the Chuseok fall harvest holiday.