The Korea Football Association (KFA) said the eight-man technical committee was formed to find bench bosses for the senior national team and the under-23 squad. The new committee, led by Kim Ho-gon, will have its first meeting on Tuesday at the National Football Center in Paju, north of Seoul.

"Because of the urgency of hiring the national football team head coach, we will first start the technical committee with eight members," the committee chief Kim Ho-gon said. "We will later announce new members who will take care of youth and women's football issues."

The KFA plans to name new national team boss no later than this month as South Korea battles to secure the last automatic berth in the final Asian qualifying round for the 2018 FIFA World Cup.

The Taeguk Warriors are currently sitting in second place in Group A with 13 points, seven behind Iran and one ahead of Uzbekistan, with two matches to play. South Korea will host Iran on Aug. 31 and face Uzbekistan in Tashkent five days later.

Only the top two teams from each of the two groups will directly advance to the 2018 World Cup in Russia. The two third-place teams must go through playoffs for their final chance.

Kim previously said he believes a South Korean coach is a better fit than a foreign tactician, since the latter will not have enough time to communicate with the players and get grasp of the team situation. 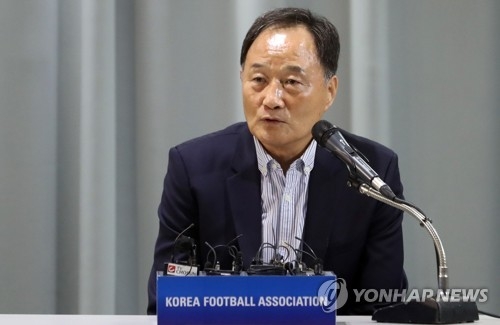