The appointment came nearly three weeks after their nominations on June 13, along with new ministers for science and gender equality. 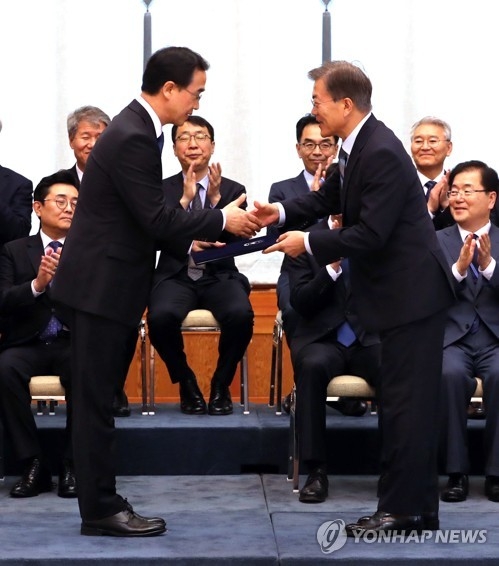 The appointment of Cho and Kim came after the parliament issued reports on the outcome of their parliamentary hearings held last week.

A new minister does not need parliamentary approval to be appointed, but is required to undergo a confirmation hearing. A report on the outcome of the hearing is generally considered a blessing, especially when the parliament is controlled by the opposition as it is now.

Parliamentary hearings for the science and gender equality minister nominees are scheduled to be held later this week.

Monday's appointment of the two new ministers brought the number of new Cabinet members appointed since the new Moon Jae-in administration set sail on May 10 to 10, including Prime Minister Lee Nak-yon.

The president has named all new 19 members of the Cabinet, including the new commerce and welfare ministers designated Monday, but strong objections from the opposition parties continue to delay the appointment of many.

The initial deadline for reports on the outcome of confirmation hearings for three minister nominees was set to expire later Monday, but the opposition parties were expected to refuse to publish reports on at least two.

The rival parties only issued a report for education-minister nominee Kim Sang-gon, who will double as a deputy prime minister for social affairs.