"President Trump raised the growing threat posed by North Korea's nuclear and ballistic missile programs. Both leaders reaffirmed their commitment to a denuclearized Korean Peninsula," the White House said in a statement about the call with Xi. 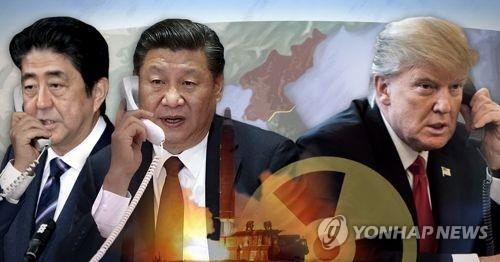 The conversation came after the U.S. downgraded China's human trafficking status and blacklisted China's Bank of Dandong as a primary money laundering concern. These measures were widely seen as reflecting U.S. frustration after months of fruitless efforts to persuade Beijing to rein in the North.

Last month, Trump also complained in a Tweet that Chinese efforts have "not worked out." Last week, the U.S. also approved the first arms sales to Taiwan since Trump came into office, sparking sharp anger from Beijing.

During the call, Trump also reiterated his determination to seek more balanced trade relations, the White House said. The two leaders also discussed a range of other regional and bilateral issues and affirmed that they look forward to meeting at the G20 in Germany, it said.

North Korea was also a top issue in Trump's call with Abe.

"The two leaders exchanged views on the growing threat from North Korea, including their unity with respect to increasing pressure on the regime to change its dangerous path," the White House said. "They reaffirmed that the U.S.-Japan alliance stands ready to defend and respond to any threat or action taken by North Korea."

They also discussed a range of other regional and global issues of mutual interest, the White House said.