NEW YORK, July 3 (Yonhap) -- China's ambassador to the United Nations warned Monday that tensions with North Korea could get out of control and lead to disastrous consequences unless negotiations reopen as early as possible.

Ambassador Liu Jieyi made the remark to reporters during a news conference he held as China took over this month's presidency at the U.N. Security Council.

"Currently tensions are high and we certainly would like to see a de-escalation," the envoy said. "If tension only goes up ... then sooner or later it will get out of control and the consequences would be disastrous."

Liu called for resuming talks with the North at an early date.

"We cannot afford to wait for too long without dialogue taking place," he said. 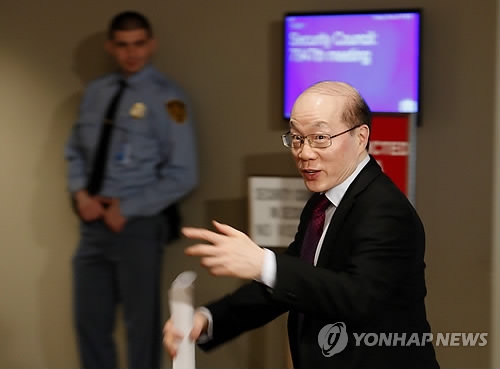 China has long called for restarting talks with the North to defuse tensions. But the U.S. says the North first should demonstrate through action it is serious about holding talks about giving up its nuclear and missile programs.

The U.S. has sought Chinese help to put "maximum pressure" on the North. But those efforts have proven futile as Pyongyang has kept on conducting weapons tests in an effort to develop a long-range nuclear missile capable of striking the U.S.

After refraining from any action that could anger the Chinese, the U.S. last week downgraded China's human trafficking status, blacklisted China's Bank of Dandong as a primary money laundering concern, and approved the first arms sales to Taiwan since Trump came into office.

These were widely seen as reflecting U.S. frustration after months of fruitless efforts to win over China.
(END)