SEOUL, July 5 (Yonhap) -- South Korean President Moon Jae-in departed for Germany on Wednesday for a Group of 20 summit where he is expected to discuss ways to rein in North Korea's evolving nuclear and missile technologies with other leaders.

His departure came one day after North Korea claimed to have had a successful test launch of its intercontinental ballistic missile (ICBM).

Moon earlier told his security officials to seek cooperation with the United States and other countries in sternly dealing with the North's provocation including the U.N. Security Council's action.

Tuesday's launch of Hwasong-14 marked the North's sixth missile test since the new South Korean president took office on May 10.

Moon is expected to rally international support in condemning the North during his meetings with G20 leaders. 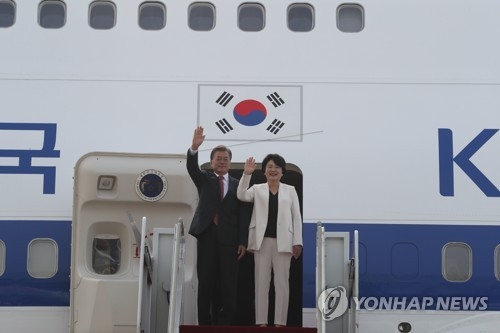 Moon and Trump agreed in their summit in Washington last week to strengthen the countries' joint deterrence against North Korean nuclear and missile threats.

The three-way talks with Japan's Abe are widely expected to focus on enhancing the countries' cooperation on ending North Korea's nuclear ambitions.

South Korea and Japan, both close allies of the U.S., have often let their bilateral ties deteriorate over historical issues that include Japan's territorial claim to a set of South Korean islets in the East Sea, called Dokdo in South Korea and Takeshima in Japan.

The Seoul-Tokyo relations are again at a low ebb after Moon hinted at renegotiating or scrapping a 2015 deal over Japan's sexual enslavement of Korean women during World War II.

The agreement, signed by Seoul's former conservative administration, is believed to be aimed at pardoning Japan's war atrocity once and for all, in exchange for 10 billion yen (US$8.85 million).

The new South Korean president said his people can not accept the deal.

Still, he has said such issues must not keep the countries from advancing their cooperation on other and more urgent issues, such as North Korea's evolving nuclear and missile threats.

Moon and Abe are also set for bilateral talks, to be held on the sidelines of the G20 summit in Hamburg early Friday, Cheong Wa Dae officials said.

The South Korean leader is also expected to hold bilateral talks with a "number of other foreign leaders," possibly including China's Xi Jinping.

Both Moon and Trump have repeatedly urged Beijing, North Korea's major ally, to do more to prevent it from making any further provocations. China accounts for more than 90 percent of North Korea's overall trade.

Moon is also expected to seek Germany's support in dealing with the provocative North.

His five-day trip to the European country will begin with a two-day stay in Berlin, where he will hold a bilateral summit with German Chancellor Angela Merkel, according to Cheong Wa Dae.

He will also hold talks with German President Frank-Walter Steinmeier.

He will head to Hamburg on Thursday to join the annual G-20 summit over the following two days. It will mark the first multinational forum attended by the new South Korean president.