The country's consumer price index climbed 1.9 percent in June from a year earlier, slightly down from the previous month's 2 percent rise, according to the data compiled by Statistics Korea.

The monthly inflation has been hovering around 2 percent since the first month of 2017, following a 1.3 percent on-year gain in December last year as rising oil prices and high-flying livestock prices pushed up the overall index.

From a month earlier, the index edged down 0.1 percent in June.

The statistics office attributed last month's gains to a supply shortage of fruit and vegetables as South Korea's agricultural economy is suffering from a monthslong draught.

"In June, as temperatures rise, the supply of such fresh food usually expands and the price goes down," said Woo Young-jae, director of the price statistics division at the statistical bureau. "But this year, the nationwide drought hurt the supply of farm products and fueled the upward trend in consumer prices."

He said a steady hike in meat and egg prices also lent support to the inflation last month in the aftermath of an outbreak of avian influenza. Prices of livestock products rose 8.6 percent on-year in June, with those of eggs surging 69.3 percent.

Meanwhile, the bullish pace of petroleum prices, which have been the biggest mover to push up the consumer prices index for months, slowed down to some extent amid falling crude prices.

Prices of petroleum products rose 2.8 percent, while those of gasoline at the pump edged up 1.6 percent last month and those of diesel increased 2.2 percent. 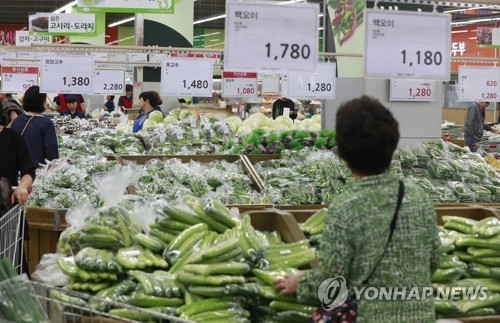