(ATTN: RECASTS with more info throughout to highlight N.K. response to Seoul-Washington summit)

SEOUL, July 4 (Yonhap) -- North Korea on Tuesday urged Seoul to end its "subservience" to the United States, as it questioned South Korea's will to improve inter-Korean ties in its reaction to the latest Seoul-Washington summit.

The Central Committee of the Democratic Front for the Reunification of Korea (DFRK) released a statement saying that the new liberal South Korean administration shows no difference in sticking to its policy of dependence on foreign forces.

"It is deplorable that (South Korea's president) told his master of the U.S. that Seoul-Washington alliance is a linchpin for the allies, and he would not seek dialogue (with the North) without Washington's approval," said the statement read by the country's state radio station.

It marked North Korea's first response to the summit between President Moon Jae-in and his U.S. counterpart Donald Trump. The DFRK is an agency affiliated with the ruling Workers' Party of Korea.

North Korea claimed that Moon is oblivious to the lessons of history as he is continuing to submit to the U.S. while abusing the power granted to him by the candlelight vigils that were sparked by a corruption scandal involving his predecessor Park Geun-hye.

"That's why we Koreans never tolerated the traitors who sacrifice the nation's dignity and interests in pursuance of outsiders, being subservient to the U.S. but dealt heavy blows on them," read its statement in English carried by the country's state news agency.

The DFRK claimed that genuine peace on the Korean Peninsula would start from Washington's withdrawal of its forces and weapons from South Korea, not from North Korea's nuclear dismantlement.

Moon took office in May with pledges to denuclearize North Korea, and seek dialogue and engagement with Pyongyang in parallel. But the North has remained negative toward Moon's stance, saying there can be no dialogue if there are sanctions against it.

He and Trump agreed to leave the door for dialogue with North Korea open "under the right circumstances," during their first summit last week.

North Korea apparently toned down its criticism of the outcome of the summit as the Korean Central News Agency, which targets readers outside the country, did not fully carry the agency's statement.

The statement came on the 45th anniversary of a landmark inter-Korean agreement on peace and reconciliation.

In 1972, the two Koreas reached a joint statement outlining the three principles of independence, peace and national unity, a cornerstone for basic guidelines for inter-Korean talks.

Earlier in the day, Pyongyang fired a ballistic missile from its northwestern province near the border with China in an apparent show of its protest against the summit.

"North Korea should stop its nuclear and missile provocations, and move forward respecting inter-Korean agreements and improving relations between the two Koreas," an official at Seoul's unification ministry said.

Kim Yong-hyun, a professor at Dongguk University, said that North Korea's reaction seems to be aimed at taking the initiative by factoring in the possibility of dialogue. 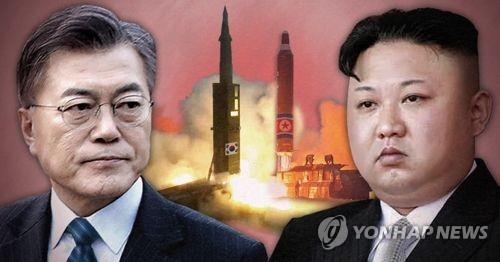