According to industry watchers, Samsung SDI Co. and LG Chem Ltd. are currently seeking to commercialize solid-state batteries, which use solid-type electrolytes. The move came as the existing lithium-ion batteries utilizing liquid-type electrolytes may catch fire and even explode if they are subject to strong shock.

While the companies made significant progress in the development of the new battery, industry watchers said the commercialization is delayed as the new technology does not offer the same capacity and performance of existing lithium-ion cells.

Local companies have been speeding up the development of safer batteries especially after Samsung Electronics Co.'s ill-fated Galaxy Note 7 phablet was discontinued last year after some of the model's batteries caught fire while being changed.

Industry watchers said Samsung SDI may complete the development within two years, with the new battery being applied on Samsung Electronics' future Galaxy smartphones. LG Chem is also seeking to expand its presence in the battery market for smartphones and electronic vehicles.

In 2015, Samsung SDI's presence in the global market of lithium-ion batteries for mobile and IT devices came to 25.2 percent, followed by LG Chem with 17 percent. Industry watchers said it is crucial for the companies to develop the new battery in order to solidify their lead.

"As there are still various hurdles in commercializing (the new battery), it is unlikely it will be released in 2017 or next year," an industry insider said. He added that the company that completes development first and commercializes safe solid-state batteries will lead the market going forward. 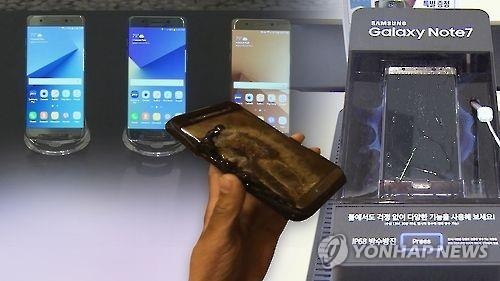