"Some day in mid-July, the president and other officials will hold a meeting to discuss the government's fiscal policies and strategies for the next five years," Finance Minister Kim Dong-yeon said at a policy meeting with ministers in Seoul.

He said after such gatherings, the finance ministry will announce a broad policy road map that will outline goals of the Moon Jae-in administration.

At that time, the government will likely revise up its 2017 growth forecast currently set at 2.6 percent.

A tax code revision could be released in early August, which may be designed to secure funds to cover President Moon's pledges to create 810,000 new jobs and support young jobseekers during his five-year term.

"Job creation is the most pressing issue in the country," Kim said. "We will put our policy priority on creating jobs."

The top economic official also urged the National Assembly to approve the proposed supplementary budget as a way to create jobs for young people and boost the economy in the latter half of this year.

The government submitted an 11.2 trillion won (US$9.8 billion) extra budget earlier this month to the National Assembly, though parliament has yet to review the budget bill due to a political standoff.

"Timing is everything when implementing a supplementary budget," Kim said. "When the National Assembly approves the bill, I'll ask all government ministries to be prepared to execute the planned budget as quickly as possible." 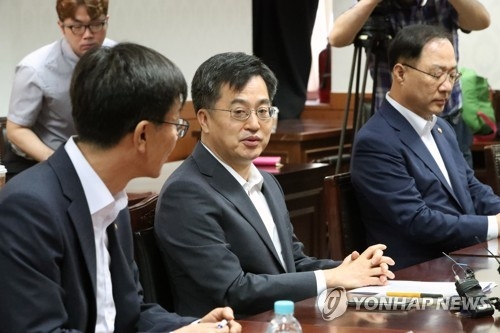 S. Korea's new gov't to unveil its economic plan within the month

S. Korea's new gov't to unveil its economic plan within the month