"North Korea fired an unidentified ballistic missile into the East Sea from the vicinity of Banghyon, North Pyongan Province, at around 9:40 a.m.," the Joint Chiefs of Staff (JCS) said. "It flew more than 930 kilometers."

President Moon Jae-in presided over a National Security Council session to discuss the North's missile test, the second in less than a month.

The U.S. military characterized it as a "land-based, intermediate-range" missile, saying it was tracked for 37 minutes before dropping into the East Sea.

"The North American Aerospace Defense Command (NORAD) assessed that the missile launch from North Korea did not pose a threat to North America," the Hawaii-based Pacific Command said in a statement. "We continue to monitor North Korea's actions closely."

Army Col. Roh Jae-cheon, a spokesman for the JCS, said South Korea and the U.S. are analyzing the apogee of the missile and other details.

"Our military is maintaining full preparedness against the possibility of North Korea's additional provocation," he told reporters. 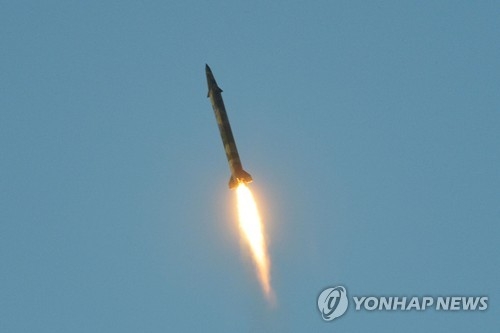 Japanese media reported that the missile may have landed in Japan's exclusive economic zone (EEZ).

A U.S. expert said the missile could have reached Alaska if fired normally.

"Assuming a range of 950 km, then a flight time of 37 minutes would require it to reach a maximum altitude of more than 2,800 km," David Wright, co-director of the Union of Concerned Scientists, said on its website. "So if the reports are correct, that same missile could reach a maximum range of roughly 6,700 km on a standard trajectory."

They also emphasized that the door to dialogue with the North remains open "under the right circumstances."

The North fired four surface-to-ship cruise missiles from its east coast on June 8 in the wake of a Scud-type ballistic missile launch from a nearby area about a week earlier.

The latest launch came as the South's president plans to depart for Germany to attend the Group of 20 summit, where he is scheduled to hold a trilateral meeting with Trump and Japan's Prime Minister Shinzo Abe.