CJ E&M, host of the event, on July 3 published Highlight's performance of "Plz Don't Be Sad" during KCON New York, which was held June 23-24.

Besides Highlight, TWICE, GFriend, Zion.T and other big names in today's K-pop also performed at the event, drawing a crowd of 43,000.

Highlight, formerly known as BEAST, released "Plz Don't Be Sad" in March. Since its debut in 2009 under Cube Entertainment, BEAST became popular at home and in Japan with hit songs "Bad Girl," "Shock," "Midnight Sun" and "On Rainy Days."

But member Jang Hyun-seung quit the group in April 2016. The five others signed up with Around US after their contracts expired in October.

The five -- Yoon Doo-joon, Yong Jun-hyung, Yang Yo-seob, Lee Ki-kwang and Son Dong-woon -- regrouped under Highlight, the title of BEAST's most recent album, after a brouhaha over the group's name with Cube. Cube holds the trademark rights to the name BEAST. 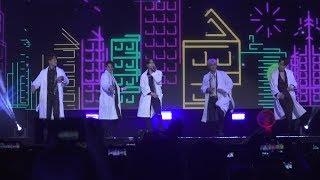