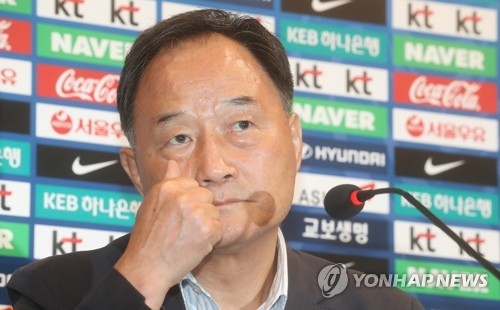 Shin, a former attacking midfielder who has 23 caps for South Korea, has been known for playing attacking football, but also has been criticized for his team's weak defense.

"We know Shin's team had defense issues, but I think underage tournaments are different from senior competitions," Kim said. "This South Korea team does have a defensive problem, so the technical committee will talk about this with Shin later."

Shin is familiar with a "firefighting role" as he previously served with the Olympic football team and the U-20 squad. On both occasions, he came in the middle of South Korea's preparation for the competitions and eventually led the team to the knockout stages. This also apparently made the KFA to go with Shin.

"We highly valued Shin's ability to operate the team and his coaching sense," Kim said. "He has experience and I think he will become stronger as he plays matches with the team."

The KFA said it is fully ready to help Shin get grasp of the team.

"We don't have enough time, so we will communicate with Shin as much as possible," Kim said. "We will utilize our resources effectively to analyze our opponents and check out the players."