Under the long-term deal, the multinational company has appointed Samsung BioLogics to manufacture Tildrakizumab, an inhibitor for the treatment of moderate to severe psoriasis.

Other financial details of the agreement are confidential, the company said, adding that the deal's volume could expand in the future.

Sun Pharma is India's top pharmaceutical company, and the world's No. 4 specialty generic producer. Its combined sales came to $4.5 billion in 2016.

The company earlier announced it will expand its contract manufacturing organization (CMO) business to help not only small firms but also work together with multinational pharmaceutical companies.

South Korea's leading conglomerate has been realigning its business portfolio to find new revenue sources. In particular, Samsung's heir apparent Lee Jae-yong has pointed out that the biosimilar business is one of the group's key businesses for the future. Samsung BioLogics is 52.1 percent owned by Samsung Group's de facto holding company Samsung C&T Corp. and 47.8 percent controlled by Samsung Electronics Co., a global tech giant. 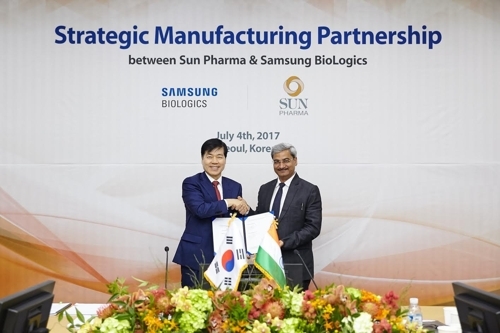