LOS ANGELES, July 3 (Yonhap) -- Scores of American educators have learned and experienced Korean history and culture in a weeklong annual seminar, an official at the Korea Culture Center in Los Angeles said Monday.

The center co-organized the event with the Washington-based International Council of Korean Studies and the Los Angeles Unified School District, according to the official.

The seminar provided lectures and discussions on a variety of themes ranging from Korea's modern and contemporary history to the development of Korea's democracy and economy, Korea's traditional music, the situation surrounding the Korean Peninsula and inter-Korean unification, according to the official.

The participants also experienced Korean dishes, costumes and pop culture, and visited a promotion hall for the 2018 PyeongChang Winter Olympics and the Korean Bell of Friendship in the city, the official said.

"I'd like to share what I've learned and felt in this seminar with my students," said Sherri Ter Molen, an instructor at DePaul University in Illinois.

Some 3,000 educators have so far joined the annual event designed to help them better understand Korea since its launch in 2014. 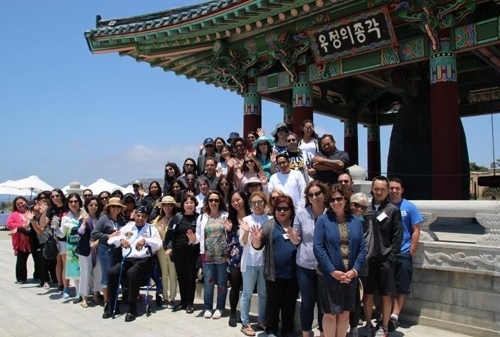