SEOUL, July 4 (Yonhap) -- North Korea on Tuesday announced the successful launch of its first intercontinental ballistic missile (ICBM), the latest in a series of provocative acts that defy international condemnation.

North Korea test-fired the missile, called the Hwasong-14, under the observance of its leader Kim Jong-un, according to the Korean Central News Agency (KCNA). Kim signed an order for the test-fire, it added.

It said the missile reached an altitude of 2,802 kilometers and flew 933 km for 39 minutes before hitting a target in the East Sea.

"The success of the ICBM launch at its first trial is the final gateway to completing our nuclear force. It marked a phenomenal event in our history as we are pursuing the dual-track policy of nuclear and economic development," the KCNA said.

North Korea claimed that it has confidently become a nuclear power possessing ICBMs that can hit targets in any place in the world.

The U.S. military characterized it as a "land-based, intermediate-range" missile, but the North announced its the purported success of its ICBM.

North Korea's leader said in his New Year's message that the country has entered the final stage of preparing to launch an ICBM capable of hitting the U.S. mainland. The North has been working on developing a nuclear-tipped ICBM.

South Korea is analyzing the missile launch by taking into account the possibility it may be an ICBM, President Moon Jae-in said at an emergency meeting of the National Security Council (NSC).

If the North's claim is true, the move is likely to dampen Moon's will to improve strained inter-Korean relations.

Moon vowed to take a dual-track approach of denuclearizing North Korea and seeking dialogue and engagement with Pyongyang.

The missile launch came on the heels of the summit between Moon and his U.S. counterpart Donald Trump. 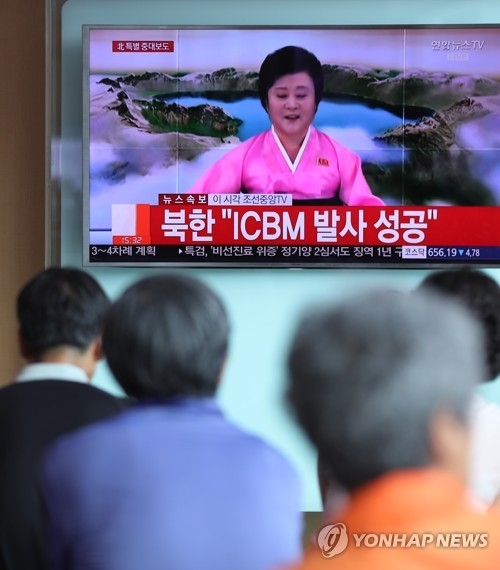