The aerospace company said it delivered the 12 FA-50PH supersonic planes three months earlier than scheduled and expressed hope the Southeast Asian country will place an additional order for the same jets down the road.

In 2014, KAI received a US$420 million order to build the jets that can perform light attack and aerial combat roles from the Philippine Air Force. The planes are designed to take over the role of the F-5 fighters that were retired in the mid 2000s.

Manila recently analyzed the FA-50 trainer jets as being "excellent and precise" for national defense and security purposes, KAI said in a statement. 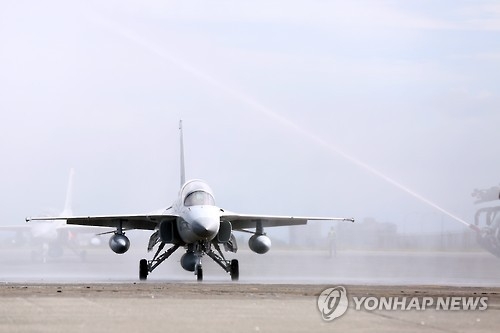 The Philippine government which seeks to modernize its military has expressed interest in purchasing the KUH-1 Surion transport helicopter, it said.

KAI has exported a total of 137 KT-1 basic trainers and the T-50 advanced trainer jets valued at $3.4 billion to seven countries such as Indonesia, Turkey, Peru and the Philippines.

It is in talks with Thailand, Botswana and the United States to export the trainer jets. Later this year, the U.S. plans to select an aircraft company to supply it with 350 trainer jets worth some 17 trillion won ($15 billion), the aircraft manufacturer said.