SEOUL, July 4 (Yonhap) -- The group of South Korean firms that have operated factories at the now-shuttered joint industrial park in North Korea said Tuesday it is unclear whether they will apply for a visit to the reclusive country as Pyongyang claimed it had a successful test of its first intercontinental ballistic missile (ICBM).

Following President Moon Jae-in's inauguration in May, the group had expressed its hope to visit the Kaesong Industrial Complex which was shut down in February 2016 amid rising tensions on the Korean Peninsula.

The previous Park Geun-hye administration ordered a total of 124 South Korean firms operating at the complex to return home, in retaliation for the North's continued provocations including a fourth nuclear test. The inter-Korean industrial complex had been regarded as the icon of the two Koreas' reconciliation.

"We were planning to request that the unification ministry approve our visit to the North, but the situation has changed due to its ICBM launch," an official at the association said.

Earlier in the day, the North claimed the successful launch of its first ICBM adding that the missile reached an altitude of 2,802 kilometers and flew 933 km for 39 minutes before hitting a target in the East Sea.

The latest military provocation came shortly after President Moon returned home from a visit to Washington, where he and his U.S. counterpart, Donald Trump, agreed to seek a phased denuclearization of the North. 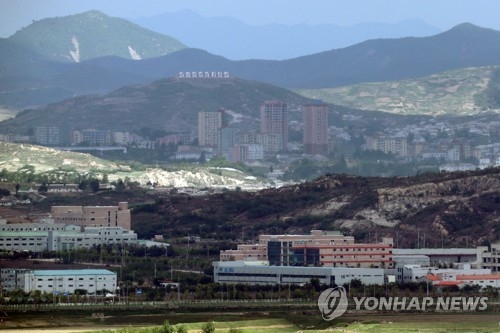