Kim Sang-kon and Kim Eun-kyung were appointed the new ministers of education and environment, respectively. The new education minister will double as a deputy prime minister for social affairs.

Their appointments came shortly after the parliament issued reports on the outcome of their confirmation hearings. 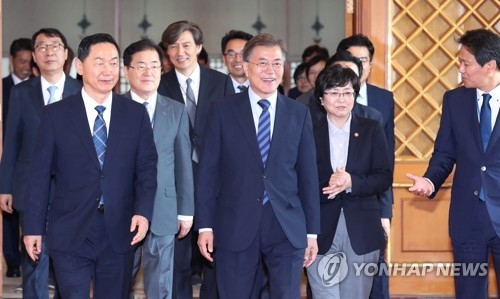 New ministers do not need the parliament's approval, but the report is widely considered a prerequisite to their appointment.

The opposition-led parliament currently refuses to publish such reports or even hold confirmation hearings for some of Moon's minister-nominees.

The president may still appoint a new minister without a parliamentary report, but may face strong public criticism, and often even a political backlash.

President Moon has named all new 19 members of the Cabinet since taking office nearly two months ago on May 10.

Only 12, including Prime Minister Lee Nak-yon, have been appointed.

Moon's ruling Democratic Party controls 120 seats in the National Assembly, the largest number for any single political party, but is still far short of a majority in the 300-seat house.