SEOUL, July 4 (Yonhap) -- Americans greeted Independence Day with news that North Korea might have actually developed a long-range missile that can cross the Pacific, a potential "game-changer" in the security landscape in Northeast Asia and beyond.

In a televised announcement on Tuesday, the North claimed that it successfully test-fired an intercontinental ballistic missile (ICBM), named Hwasong-14.

Launched on the "maximum-lofted" trajectory, it reached an apogee of 2,802 kilometers and flew 933km for 39 minutes, Pyongyang said, an assertion verified most by the South Korean and U.S. militaries.

"The range of a ballistic missile is estimated by quadrupling the maximum altitude," Shin Won-shik, who served as deputy chairman of the South's Joint Chiefs of Staff. "It means the missile's range surpasses 10,000km when launched on a standard trajectory." A missile with the range of 5,500km or longer is usually regarded as an ICBM.

It marks the first time that the secretive North has talked openly about a successful ICBM launch. 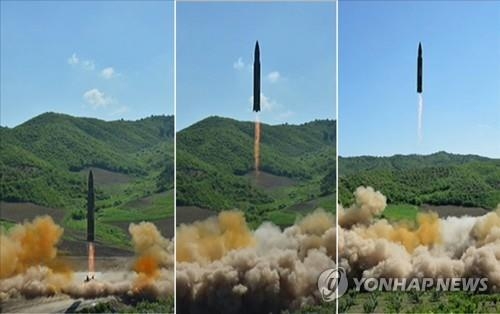 If true, it would make North Korea the world's sixth nation with an ICBM following the U.S., Russia, China, India and Israel.

Although the North launched several long-range missiles over the past decade, it claimed that they were part of a space program.

"It represents North Korea's declaration that it has completed the line-up of missiles to include long-range ones," Moon Geun-sik, a missile expert at the Korea Defense and Security Forum, said.

"North Korea is expected to seek to increase pressure on the U.S. by firing Hwasong-14 periodically."

The latest in a series of provocations came three days after summit talks between the presidents of South Korea and the U.S. in Washington D.C. President Donald Trump supported President Moon Jae-in's push for improving inter-Korean ties through dialogue.

The North's possession of an ICBM, if proven to be functional and reliable, would deal a heavy blow to Moon's pursuit of dialogue.

It also suggests that the Kim Jong-un regime has come closer to the capability of delivering nuclear bombs to the mainland U.S., as it's apparently working to make small warheads that can fit on a missile.

"For North Korea, it's proceeding (with nuclear and missile development) in accordance with its road map," said Kim Dong-yub, a professor at the Institute for Far Eastern Studies in Kyungnam University. "It's trying to perfect a nuclear deterrence technology to use it as a sword for survival. Dialogue is not a priority."

American defense officials have acknowledged the seriousness of the North's nuclear and missile programs.

They are increasingly concerned about the North's ability to conceal its missile launches from various sites until the last minute.

But they have played down its long-range missile capability, saying a full ICBM appears still multiple years away. They cited atmospheric re-entry as one of major difficulties.

If the North's claim of a successful ICBM test is confirmed, the Trump administration will be forced to rethink its approach toward Pyongyang, according to Chun Yung-woo, a former South Korean national security advisor

"The U.S. will ratchet up sanctions and pressure," he said. "There is a possibility that it will introduce a secondary boycott (against foreign entities transacting with North Korea) and consider additional arms sales to Taiwan to put pressure on China."

U.S. officials stated that all options are on the table in dealing with North Korea.