SEOUL, July 6 (Yonhap) -- Until recently, the 400-meter-long road along the presidential compound Cheong Wa Dae was dotted with checkpoints, barricades and plain-clothed policemen who would hurl a vexing, if not rude, question to passers-by, "Where are you going?"

The heavily guarded trail kept conjuring up the aloof, high-handed image of a president and seemed to underscore the yawning psychological gap between citizens and the occupant of Cheong Wa Dae.

But that negative image started to evaporate with President Moon Jae-in's decision to lift the nighttime curfew for the road, which was put in place some five decades ago following an armed infiltration.

"Though it may be a small change, I am very pleased to return to you the street of citizens that has been blocked by those in power," first lady Kim Jung-sook said when the curfew from 8 p.m. to 5:30 a.m. was lifted last Monday. 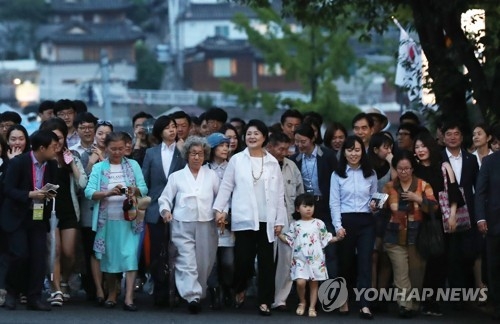 The liberal president's decision was in line with his election pledge to strengthen communication with citizens disenchanted with ousted former President Park Geun-hye that critics accused of shunning dialogue even with her top aides.

Following the abolition of the movement restriction, five checkpoints on the road were turned into traffic management facilities and blockades removed, with security personnel now offering greetings instead of intrusive questions. 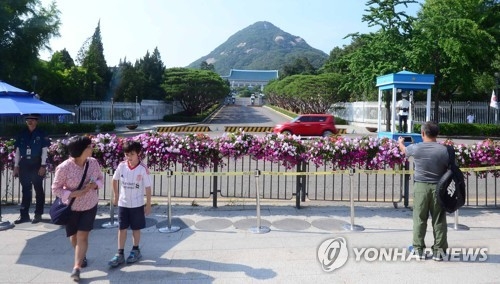 The curfew was introduced in 1968 after 31 North Korean agents attempted to sneak into the presidential office on a mission to assassinate then President Park Chung-hee. One of them was captured alive, while 28 were shot dead with two others having fled.

Former President Kim Young-sam, who achieved a full civilian government with his inauguration in 1993, relaxed the restriction in the vicinity of the presidential residence, but left the nighttime curfew intact.

Citizens welcomed their newfound right to walk or drive through the road that features tall green gingko trees and the long traditional stonewall encircling the ancient Gyeongbok Palace, one of the capital city's top tourist attractions.

"Whenever moving past this road, we got reminded of unpalatable -- and often gruesome -- images, including that of an authoritarian -- not authoritative -- (leader)," said Cho Ki-tae, a 72-year-old resident who has lived near Cheong Wa Dae for some 50 years.

"Now, those negative images have gone ... I think it is such a huge change and the right step forward," he said. 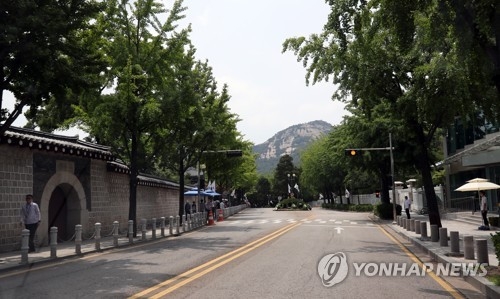 Sohn Young-hee, another resident in the area, said she used to balk at using the road to avoid being constantly interrupted and questioned by police. But she said she now fully enjoys talking a stroll down the scenic road.

"I sometimes talked back to the security staff here, asking why you asked a longtime resident where she is headed? I thought it was overprotection for the head of state, and I sometimes took a detour to avoid encounters with the police," she said.

"Now, I feel sort of unshackled and plan to come out here every night... and I view the president's decision to remove the road restriction as a small yet meaningful step that could lead to a big confluence of communication with citizens," she added.

Grace Choi, a Seoul-based journalist, said that the restriction removal will bring more "warmth" to the road that she said was like an "off-limits island" in the urban center.

"We, citizens, only now have the fair opportunity to revel in its beauty long overshadowed by the restriction," she said.

Moon has long stressed the importance of building a good rapport with the general public. As one measure to achieve it, he has pledged to relocate the presidential office to the government complex in downtown Seoul from the current secluded location.

Moon's decision to give citizens unimpeded access to the road gave a slight boost to his approval rating.

In the Realmeter survey conducted last week, 75.3 percent approved of Moon's job performance, up 1.1 percentage points from the previous week. The pollster partially attributed the uptick to a series of positive reports about the curfew removal.

Some citizens, however, voiced skepticism, calling the removal a populist decision to curry favor with civic groups that led massive protests for the ouster of the former president earlier this year and helped propel Moon into presidency.

"I am skeptical about whether the decision to lift the curfew will still remain after the end of Moon's term," a citizen said, requesting anonymity.

The curfew removal is expected to increase the workload for the police as more residents, citizens and tourists began gathering around the road. Among the increasing number of visitors are protesters seeking to have their voices heard in front of the presidential house. 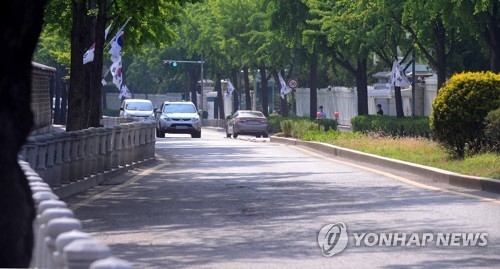