"My reconstruction of the missile's trajectory, assuming the North Korean claims are correct, give it a maximum range of perhaps 8,000 kilometers," John Schilling, a consultant to the 38 North website, told Yonhap News Agency.

"At that distance, it could probably reach the tip of the U.S. Pacific Northwest, and maybe the city of Seattle, but just short of the performance it would need to reach the more interesting and strategically valuable West Coast targets like the naval base at San Diego," he said.

He said there could have been a performance shortfall and some additional testing will be required.

"The North Koreans will also need to demonstrate accuracy and reliability, and train the operational launch crews," he said. "However, these things are unlikely to take more than another year or two, and we may see an operational North Korean ICBM capable of reaching U.S. West Coast targets in 2018 or 2019." 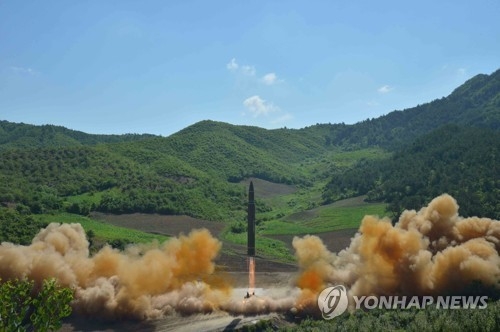 After firing a ballistic missile earlier Tuesday, the North claimed it succeeded in its first ICBM test, with the missile soaring as high as about 2,800 km before coming down in the East Sea some 930 km away from the launch site.

Officials in South Korea and Japan gave similar altitude and distance figures, raising the possibility that the North's claims are true, though the U.S. Pacific Command initially identified the North's missile as an intermediate-range class.

The U.S. government hasn't issued an official response to the launch yet.