The K League Classic club said it acquired Han to advance to the Asian Football Confederation (AFC) Champions League next year. Terms of the deal were not disclosed.

Han, 27, is an energetic midfielder who has 41 caps for South Korea. He started his pro career with the Japanese club Shonan Bellmare in 2010 and went on to play for Kashiwa Reysol and Qatar SC. He joined Al Gharafa last year.

Gangwon said they first met Han on May 25 when he was in Seoul for the national football team's World Cup qualifying match. Gangwon added that Han decided to join the club after he returned to South Korea on June 24.

Han said he is happy to join a club based in Gangneung, a city in Gangwon Province where he graduated high school.

"I have good memories in Gangneung," he said. "I want to get along with my teammates quickly and help Gangwon get good results."

Han has been linked with various South Korean clubs as he planned to come back to South Korea before starting his mandatory military service. To apply for the military football club Sangju Sangmu, a player must be registered with a local club for at least six months.

Gangwon, currently third in the 12-team K League Classic, said Han's addition will boost their defense. Gangwon allowed 29 goals in 18 matches, tied for second worst in the first division, and recently saw their Cypriot defender Valentinos Sielis out for the season with a knee injury. 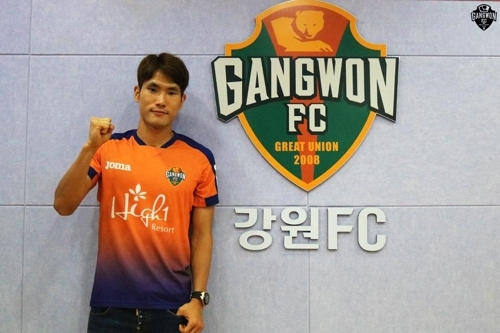