SEOUL, July 5 (Yonhap) -- Ryu Hyun-jin of the Los Angeles Dodgers has been placed on the 10-day disabled list (DL) due to continued foot soreness.

The Dodgers announced Tuesday (local time) Ryu is dealing with a pain in his left ankle. The left-hander will be replaced on the roster by right-handed pitcher Ross Stripling.

This is the second time this season that Ryu headed to the DL. In May, he was transferred to the 10-day DL with a hip injury.

Ryu was struck on the left foot by a hard-hit liner from Andrelton Simmons during the fourth inning of the Dodgers' 3-2 loss to the Los Angeles Angels at Angel Stadium of Anaheim on June 28. He continued to pitch into the sixth inning but was removed shortly after allowing a two-run homer to Simmons.

Ryu struck out eight and walked one, while allowing two earned runs on seven hits in 5 2/3 innings but took a no-decision in that game.

Ryu then went for X-rays on his injured foot the next day, and the scan results came back clean. The 30-year-old, however, claimed that he still feels some sort of pain and went for additional X-rays on Monday, which also came back negative.

Even though test results proved that he has no structural damage on his left foot, the Dodgers decided to place Ryu on the DL to give him some time of recovery.

"Hyun-jin is in the clear," the Dodgers manager Dave Roberts told MLB.com. "But he's still sore with playing catch with that we just thought it was responsible to put him on the disabled list and get him back at some point soon."

Ryu was originally scheduled to start one of three games against the Kansas City Royals later this week, but the South Korean could be sidelined longer than 10 days, according to Roberts, adding that the pitcher will throw a simulated game before he returns.

Ryu missed the entire 2015 season after a shoulder operation. He returned to make one start in 2016 before shutting down with elbow problems. 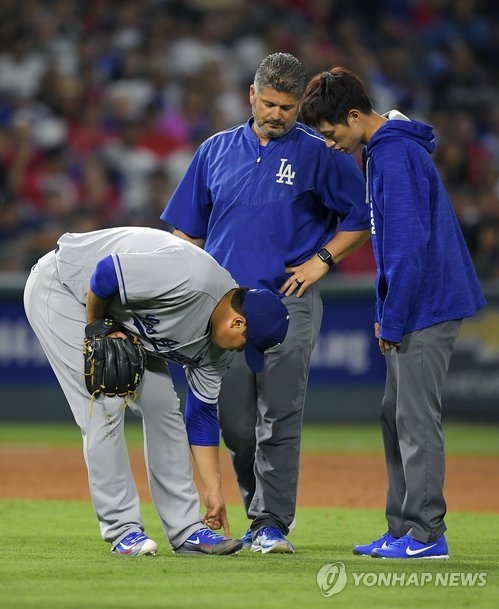