SEOUL, July 5 (Yonhap) -- Exports will continue to serve as the locomotive of South Korea's economic growth in the second half of the year amid the ongoing global recovery and the boom in the IT industry, foreign investment banks said Wednesday.

South Korea's exports rose for the eighth consecutive month in June helped by surging oil prices and recovery in worldwide trade. This is a turnaround following two years of minus growth in 2015 and 2016, when oil prices fell dramatically.

Outbound shipments rose 15.8 percent to US$279.4 billion for the first six months this year from a year earlier, while imports soared 21 percent to $233.6 billion during the same time span.

Buoyed by surging exports, which account for over 40 percent of South Korea's gross domestic product, the Bank of Korea recently upgraded its growth forecast for the country to 2.6 percent from 2.5 percent.

Major foreign banks followed suit to raise the growth outlook for South Korea to between 2.8 and 2.9 percent.

Barclays, HSBC and Nomura Securities Co. expected in separate reports that South Korea's exports will continue to grow in the second half of the year despite slowing exports in ships and the receding of the low base effect, according to the Korea Center for International Finance (KCIF).

Citibank and the Bank of America (BofA), meanwhile, forecast the export growth at 7-8 percent for the July-December period, citing the robust international commerce and the global boom in smartphones and other IT gadgets.

Citibank expects industrial output will continue to grow in the second half buttressed by an increase in facility investment and the newly launched Moon Jae-in administration's economic stimulus measures.

JP Morgan also predicted the surging consumer and business sentiments will lead to an increase in money being poured into facilities. 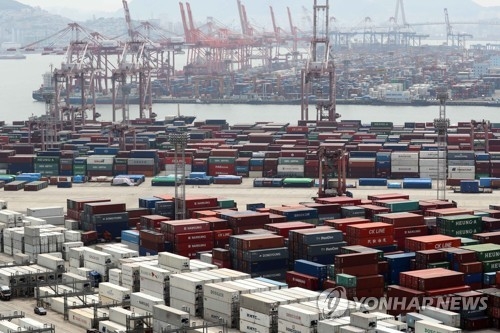