According to the data compiled by the Ministry of Science, ICT and Future Planning, the number of South Koreans using IoT-related services came to 5.95 million in May. The ministry said the IoT subscribers added an average of 100,000 users every month.

IoT is a concept in which all tangible objects are connected to the Internet and can identify themselves to other devices in order to exchange necessary data for improved efficiency and convenience.

The rising services and gadgets using IoT technology by the country's three major carriers -- SK Telecom Co., KT Corp. and LG Uplus Corp. -- were cited as one of the key factors for the surge in IoT services users.

The IoT technology is seen as one of the major technological developments of the Internet and a new revenue source for telecom firms.

SK Telecom recently launched Keyco, an IoT-based keychain with an embedded GPS chip for pets that can be controlled by a smartphone, allowing the owner to pinpoint the location of their pets.

Also, the mobile carriers joined hands with major construction firms to nurture the "smart home" industry that connects IoT within apartments and buildings. 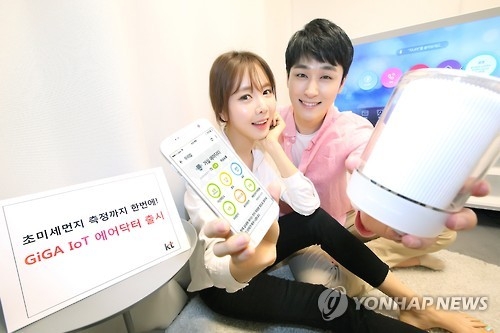