Episode 14 of "Fight For My way" aired Tuesday recorded 13 percent viewership nationwide, according to Nielsen Korea.

Starring Park Seo-joon and Kim Ji-won, the show centers around a group of four young adults, who say they have "third-rate" mundane and mediocre lives but later push forward to realize their unfulfilled childhood dreams.

SBS TV's "My Sassy Girl," a romantic comedy remake of the Jun Ji-hyun movie from 2001 in a Joseon-era setting, and MBC TV's crime drama "Lookout" tied in second place. Both shows chalked up ratings of 8.3 percent and 9.7 percent for their first and second episodes aired Tuesday, respectively.

The two shows have adopted a new broadcast format in which a one-hour conventional TV episode is split into two half-hour airings with ads in the middle. 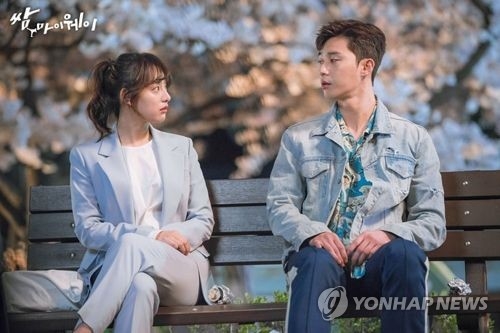