The organizing committee said Kim will take part in promotional activities for the Olympics and the Paralympics in 2018 as honorary ambassador.

Kim, 41, is known for his slapstick and acrobatic stunts and has been featured in various entertainment shows. He said he feels honored to promote South Korea's first Winter Games.

"I have a great respect for athletes, and they're really amazing," Kim said at his appointment ceremony. "I want to thank officials for giving me this opportunity to promote the stage for the athletes. I want to experience as many winter sports as possible."

The entertainer joins other non-sports figures like actors Kim Woo-bin and Lee Min-ho, along with soprano Sumi Jo, on the list of PyeongChang's honorary ambassadors.

The Winter Olympics will kick off Feb. 8 next year for a 17-day run in PyeongChang and two other adjacent cities in Gangwon Province. 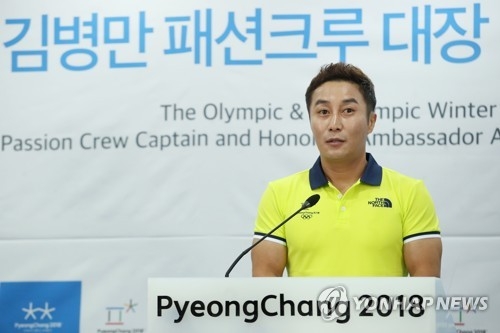