SEOUL, July 5 (Yonhap) -- South Korean President Moon Jae-in arrived in Berlin on Wednesday for a Group of 20 summit and talks with world leaders, which are likely to focus on tensions over North Korea's powerful missile test, the presidential office Cheong Wa Dae in Seoul said.

Moon's five-day trip comes after the North's launch on Tuesday of what is believed to be an intercontinental ballistic missile (ICBM), which immediately prompted international condemnation and thrust its military ambition to the center of the summit of G-20 leaders to be held Friday and Saturday.

An emergency meeting of the U.N. Security Council was set to be convened later Wednesday in New York, according to South Korea's foreign ministry, possibly to discuss additional sanctions against the communist North.

During a meeting with security and foreign affairs officials Tuesday, the South Korean president called for U.N. measures against the North's latest act of provocation. 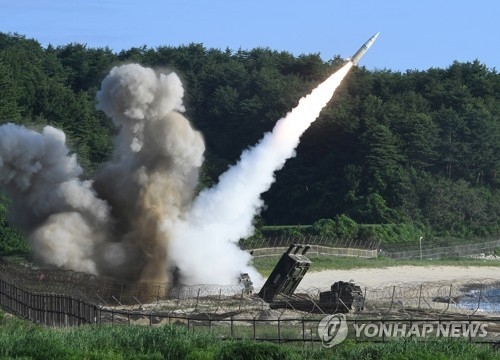 The launch, if confirmed, will mark its first test of an ICBM, which in turn will prove its capability to target the mainland U.S.

North Korea has staged six missile tests since the new South Korean president took office in May. Pyongyang has conducted five nuclear tests with the last one staged in September last year.

After a two-day visit to Berlin, he is scheduled to head Thursday to Hamburg for the G-20 summit.

Their discussions are expected to focus on ways to rein in North Korea's evolving nuclear and missile technologies.

Through his bilateral talks with many other foreign leaders and his participation at the G-20 summit, the South Korean president will rally international support for his country's efforts to bring North Korea's provocations to an end and the reclusive state back to the dialogue table.

Even after the North's claimed ICBM launch Tuesday, Moon said the door for dialogue still remained open to North Korea.

However, he has also warned of serious consequences should the North cross what he called a "red line."

"I hope North Korea will not cross the point of no return," Moon said earlier. 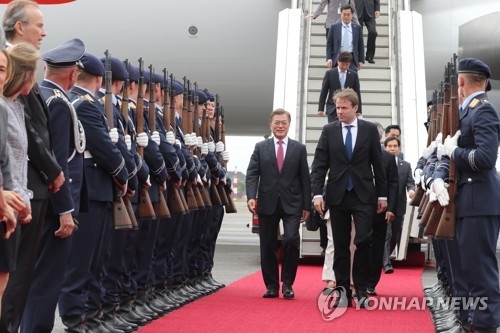 In a show of strength, South Korean and U.S. forces here staged a joint drill on Wednesday that involved the firing of several missiles into the East Sea.

The exercise came at a suggestion by the South Korean president, who said the latest North Korean provocation required more than just words in response, according to Cheong Wa Dae.

"President Moon said North Korea's serious provocation required us to react with more than just a statement and that we need to clearly show our missile defense readiness to North Korea," it said.