The human rights center at Seoul National University unveiled the video filmed in 1944 of seven female captives of the U.S.-China allied forces in Yunnan, located in China's southwest near the border with Myanmar.

The research team, headed by professor Jung Chin-sung, found it at the U.S. National Archives and Records Administration after two years of search. The Seoul Metropolitan Government funded the project.

The black-and-white footage, which lasts 18 seconds, shows a man presumed to be a Chinese officer under the 8th Command of the U.S.-China combined forces, conversing with one of the women, all barefoot, looking nervous and fearful. Some of them ducked their heads.

It was filmed by a U.S. soldier from a signal corps on Sept. 8, when the allied forces had retaken the area from the Japanese military.

Although the individual woman in the footage cannot be identified, the fact that they are the same people wearing the uniform dresses from a well-known photograph of four "comfort women," including one pregnant, proves that they had belonged to the group.

Also, the U.S. soldiers kept a register of the filmed women, which had their names, ages and hometowns, the research team said. 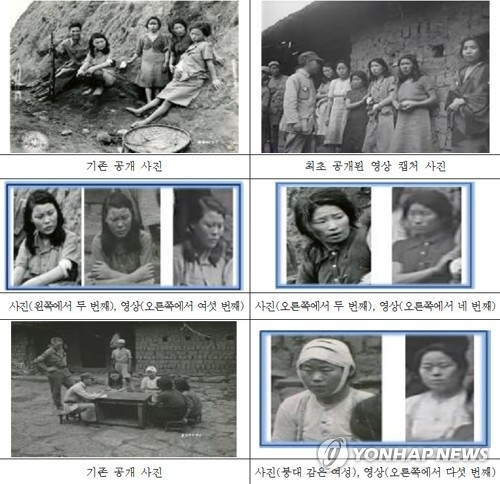 As many as 200,000 Asian women, mostly Korean, were forcibly sent to front-line brothels from 1939-1945 to provide sex services for Japanese soldiers. Korea was then a colony of imperialist Japan, whose aggressive human rights abuses during the war still remain an international issue to be resolved.

Although Japan has expressed regrets for wartime atrocities, South Korea has argued that it needs to fully atone for its mobilization of the sexual slavery.

The previous Park Geun-hye government reached a $1 billion yen (US$8.84 million) deal with Tokyo in 2015 as a settlement for Japan's wartime atrocities. The agreement has stirred a strong backlash in South Korea, with critics slamming the decision as "selling off the victims in return for money."

New liberal President Moon Jae-in has told his Japanese counterpart Shinzo Abe soon after taking office in May that many Koreans do not accept the deal "emotionally," hinting at its possible renegotiation.