SEOUL, July 5 (Yonhap) -- The chief organizer of the PyeongChang Winter Olympics said Wednesday that he is optimistic about North Korea's participation in the Winter Games south of the border next year despite Pyongyang's recent missile provocation.

North Korea on Tuesday test-fired an intercontinental ballistic missile (ICBM), named the Hwasong-14, and claimed that its ICBM is capable of carrying a large-sized nuclear warhead. While the international community is calling for tougher sanctions against North Korea for heightening tensions and violating multiple U.N. resolutions, Lee Hee-beom, who leads the PyeongChang Organizing Committee for the 2018 Olympic & Paralympic Winter Games (POCOG), said he believes the communist state will send its athletes to South Korea's first Winter Games next year.

"In sports, it gets complicated when politics intervene," Lee said to Yonhap News Agency after the games' honorary ambassador appointment event in Seoul. "We are looking at this issue (of North Korea's participation) with the Olympic spirit."

South Korea has been pushing for sports diplomacy to ease lingering tensions on the Korean Peninsula. South Korea's President Moon Jae-in told the International Olympic Committee (IOC) President Thomas Bach on Monday that he would like to see North Korea at the PyeongChang Games since that can contribute to peace in the region.

Lee said he expects South Korea's and international efforts to bring North Korea into the upcoming Winter Games will go on despite Pyongyang's ICBM test.

"North Korea does intend to join the PyeongChang Olympics," he said. "But they need athletes to qualify for the event, and we told the IOC to work on this problem together."

Lee said the North's latest provocation will not pose a big threat to the South's Olympic preparations.

"North Korea's provocations are not new," he said. "Sports should go on as sports, and the Olympics should progress as it is."

When asked about the possibility of forming a unified Korean team at the PyeongChang Games, Lee said it's not right to talk about the issue at the moment since it must be confirmed that North Korea is taking part in the 2018 Winter Games first before discussions of its participation can begin.

The 2018 Winter Olympic Games are scheduled for Feb. 9-25 in PyeongChang, some 180 kilometers east of Seoul in Gangwon Province, and the adjacent sub-host cities of Gangneung and Jeongseon. 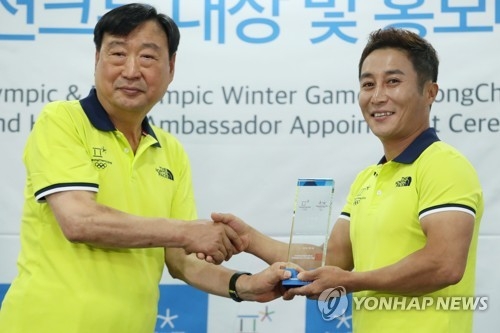