SEOUL, July 5 (Yonhap) -- Supreme Court justice-nominee Cho Jae-youn pledged during a parliamentary confirmation hearing Wednesday that if appointed he will work to restore public trust in the judiciary by delivering fair, commonsensical rulings and stamping out rampant "special treatment" to judge-turned-lawyers.

"Through exhaustive self-reflection and self-awareness, I will try to grasp the common perception that is not adulterated by personal values or religious convictions, and fulfill my mission as a Supreme Court justice," Cho said. 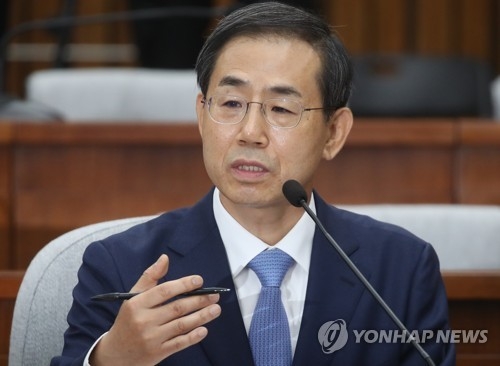 "I will also do my best to ensure that the judiciary will gain public trust through impartial, right rulings," he added.

When Rep. Song Seog-jun of the main opposition Liberty Korea Party asked him about his views on drunk driving, alluding to the past wrongdoing by the nominee's wife, Cho bluntly called it a "deliberate murderous act."

"When I served as a judge, I had kept a tough stance about drunk driving, and that remains unchanged," the nominee said.

"Our society as a whole has to be cautious to ensure drunk driving will not happen ... I feel sorry that such a thing has happened in my family," he added.

On the long-standing suspicion that courts have given favorable treatment to former judges and prosecutors "out of respect," Cho said he would seek an institutional improvement to help remove it.

"I agree that such suspicion has spawned public distrust... We now have to do away with it," he said.

During the hearing, opposition lawmakers attacked Cho for spending large sums of money on educating his three children overseas.

Noting his work as an attorney for the past 24 years, he voiced hopes that he could add some "diversity" to the 14-member bench. Cho has worked as a lawyer since 1993 after serving as a judge for about a decade.

When asked about his post-retirement plan, he said he would not work as a lawyer for the sake of private interests.