SEOUL, July 5 (Yonhap) -- Jung Hae-sung, the chief assistant coach of the South Korean national football team, decided to step down from his post on Wednesday, a day after the national football governing body named a new boss for the senior squad.

The Korea Football Association (KFA) on Tuesday appointed former under-20 national team head coach Shin Tae-yong as the new skipper for the men's senior team. Shin, 46, fills the vacancy left by Uli Stielike, who was sacked last month after South Korea's 3-2 loss to Qatar in a World Cup qualifier.

Jung, who served as top assistant to Stielike from April, said he decided to resign so that Shin can form his own staff without pressure. The KFA technical committee previously said it gave all rights manage the national team coaching staff to Shin.

Jung's contract period with the KFA was through the 2018 FIFA World Cup, should South Korea qualify for the football's showpiece event.

"I thought it's right for me to step down at this moment since Shin needs to make the team with his people," Jung told Yonhap News Agency in a phone interview. "The national team is currently at a difficult time and since this team is more important than my personal situation, I decided to quit."

The KFA hired Jung to facilitate communication between the players and the coaching staff, while utilizing his international experience. The 59-year-old previously served on the national team bench at the 2002 and 2010 FIFA World Cups, working under Guus Hiddink and then Huh Jung-moo.

Jung, who also coached two K League Classic clubs -- the Jeonnam Dragons and Jeju United, was also tapped as one of Stielike's successors in the coaching job. He and Shin were reportedly the two final candidates picked by the KFA technical committee, but it was the latter who earned the nod.

Shin, who also served as an assistant to Stielike before taking over the U-20 side last year, is expected to announce his back room staff operation plan on Thursday when he holds a press conference at the KFA headquarters.

In the final Asian qualifying round for the 2018 FIFA World Cup, South Korea are barely holding on to the final automatic qualification spot with only two matches remaining. They are stuck at 13 points with four wins, a draw and three losses, sitting in second place in Group A, but Uzbekistan are only one point behind.

In Asia, the top two teams from Groups A and B will advance directly to the World Cup in Russia. The two third-place teams must go through a playoffs for their final chance. 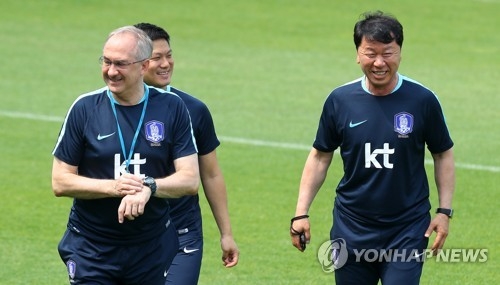