"Though we are now in a situation where it is somewhat awkward to talk about inter-Korean reconciliation and cooperation, it is crucial for us to maintain the atmosphere of reconciliation through sports activities," Lee said during a session of a state panel focused on preparing for the quadrennial event slated for Feb. 9-25.

The call came a day after Pyongyang claimed its first test of an intercontinental ballistic missile, triggering global condemnation and calls for tougher sanctions, which posed a dilemma to President Moon Jae-in seeking dialogue with the provocative state. 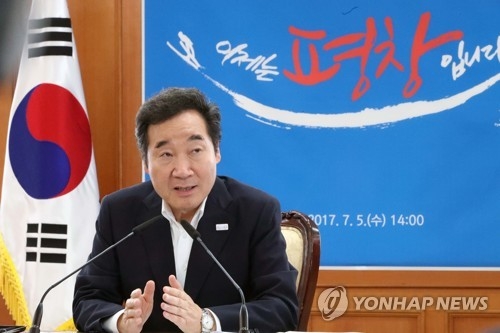 The premier underscored his hopes for inter-Korean rapprochement through sports, saying, "The river continues to flow underneath even if its surface might be frozen."

"I make a proposal again for the North's participation, and to achieve it, our government will strive harder," he added.

During an opening ceremony for the World Taekwondo Championships on June 25, Moon made the first proposal, saying he hopes to see the two Koreas create a unified team for the Winter Olympics.

Chang Ung, a North Korean member of the International Olympic Committee who participated in the Taekwondo event, dismissed the proposal as "funny and naive."