SEOUL, July 5 (Yonhap) -- North Korea's overseas mouthpiece said Tuesday diplomatic negotiations have risen as the sole clue to address its confrontation with the United States with the success of its recent intercontinental ballistic missile launch.

"The ongoing nuclear showdown between Pyongyang and Washington has entered into its final phase with the North's successful Hwasong-14 ICBM test-fire, and now avoiding armed conflict and seeking ways to find a clue to settle it via diplomatic negotiations have become a pressing issue that the international community can no longer turn away from," the Chosun Sinbo, a pro-Pyongyang newspaper based in Tokyo, said.

The nuclear war crisis between the two nations can be resolved not via the abandonment of Pyongyang's nuclear policy but via that of Washington's hostile policy, the paper said.

"It's not North Korea but the United States that should change," it said.

The paper's claim is in line with North Korean leader Kim Jong-un's remarks the previous day that the North will never offer to abandon its nuclear weapons and ballistic missiles in any case unless the U.S.' hostile policy and nuclear threat are fundamentally cleared away.

"Any military action against a country with nuclear retaliation capabilities will literally cause a destructive consequence," the paper said. 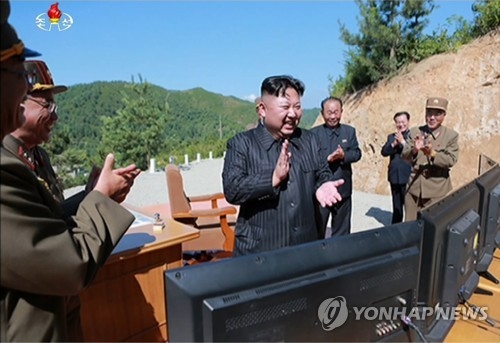