Moon made the remark at a meeting with some 200 South Koreans in Germany after he arrived in Berlin for a Group of 20 summit and talks with world leaders.

His visit came on the heels of North Korea's test-firing of an intercontinental ballistic missile (ICBM) a day earlier.

"Though North Korea has still not suspended its provocations, the alliance between Seoul and Washington remains strong and sources of tensions also eased," Moon said. 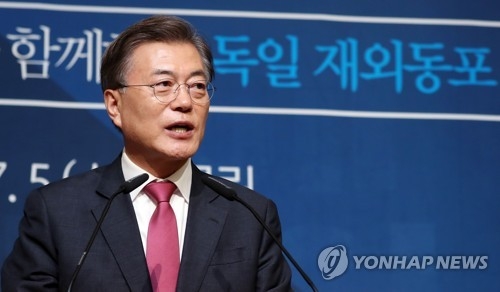 They agreed last week to keep applying sanctions against the North's nuclear and missile provocations, but also to leave the door open for dialogue "under the right circumstances."

But Moon's aspirations for dialogue with North Korea are quite overshadowed by North Korea's launch of an ICBM. Moon earlier vowed to take a dual-track approach of denuclearizing North Korea and seeking dialogue.

"More than anything else, the allies agreed on efforts to seek a peaceful resolution to North Korea's nuclear issue and bring permanent peace to the Korean Peninsula," Moon said. "The U.S. supported South Korea's leading role in that process and its will to resume dialogue. It is very important progress."

He stressed that he will make efforts to achieve such accomplishments at the G20 summit which will be held in Hamburg on Friday and Saturday.

Moon said that Berlin, once viewed as the symbol of division and the Cold War, has become that of peace and unification, saying that South Korea should also walk on that path in the future.

"I will pump up efforts to help South Korea become a country where division completely ends," he added.
(END)

(LEAD) Moon asks for support for gov't will to resolve N.K. nukes via dialogue

(LEAD) Moon asks for support for gov't will to resolve N.K. nukes via dialogue