WASHINGTON, July 5 (Yonhap) -- U.S. President Donald Trump on Wednesday questioned the sincerity of China's efforts to pressure North Korea, pointing out a sharp increase in the country's trade with the communist neighbor.

"Trade between China and North Korea grew almost 40% in the first quarter. So much for China working with us -- but we had to give it a try!" Trump said in a Twitter posting.

It was Trump's latest expression of frustration after months of fruitless efforts to persuade China to exercise more of its influence as the North's economic lifeline to rein in the regime. China accounts for nearly 90 percent of the North's total trade.

Trump's frustration appears to have deepened after the North stunned the world with its first test Tuesday of an intercontinental ballistic missile apparently capable of striking the United States. 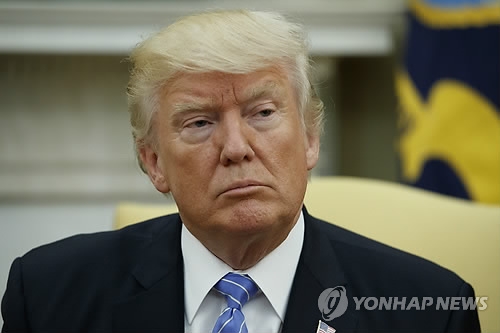 Since then, the U.S. has downgraded China's human trafficking status, blacklisted China's Bank of Dandong as a primary money laundering concern, and approved the first arms sales to Taiwan since Trump came into office.