"Right now, the situation is getting worse to create a momentum for dialogue with North Korea, and we cannot but be concerned of a possible armed conflict as the North continues to raise tension by making nuclear and missile provocations," Moon said in a meeting with German President Frank-Walter Steinmeier, according to Moon's presidential office, Cheong Wa Dae. 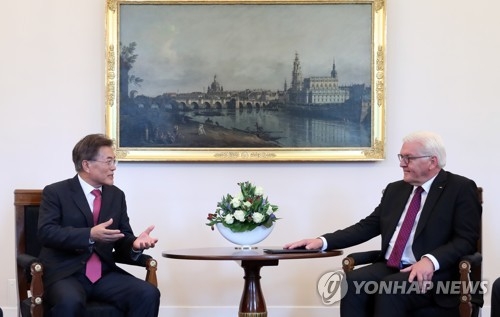 North Korea launched what it claimed to be an intercontinental ballistic missile (ICBM) on Tuesday. It marked the sixth missile test staged by Pyongyang since Moon took office on May 10.

Moon earlier called for a strong reaction by the international community and his own country, telling his security officials to seek a U.N. Security Council reaction while ordering his top military commanders to stage a joint missile exercise with U.S. forces stationed here.

Meeting with his German counterpart in Berlin, the South Korean president said it was imperative to increase international pressure on North Korea, but that they must still seek to engage with the reclusive state.

"We can never allow a war on the Korean Peninsula ever again. And that is the reason we must seek to resolve the issue through dialogue and peaceful means, though it is imperative that the international community further increase its pressure and impose strong sanctions" on North Korea, he said.

Moon also urged increased support from China and Russia, both considered communist allies of Pyongyang, in ridding North Korea of its nuclear ambitions.

"China and Russia must raise their awareness that the speed of the North's nuclear and missile development is fast. International sanctions and pressure may not have any practical effect without China and Russia's active participation," Moon's spokesman, Park Soo-hyun, quoted him as saying in a press release.

"I believe China especially holds the key, and I will discuss the issue in depth when I meet (Chinese President) Xi Jinping tomorrow," Moon added.

The South Korean leader arrived in Berlin Wednesday (Berlin time) on a two-day visit. He was also set to hold bilateral talks with German Chancellor Angela Merkel later in the day, according to his office.